Mangroves on the run find a more northern home 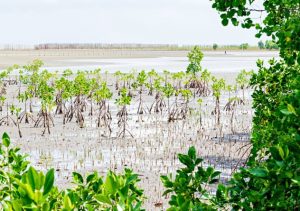 The north might no longer be as inhospitable to mangroves as it once was.

Fleeing rising seas in South Florida, mangroves are establishing themselves farther north along Florida’s Atlantic and Gulf coasts. Some are thriving in southern Texas and are already approaching Mississippi and Alabama – places where they historically could not withstand the climate, according to a new FIU study.

“Severe freeze events kill them all off,” said FIU researcher Sean Charles, the study’s author. “In the northern Gulf of Mexico, those freeze events have become a lot less frequent, so the mangroves have expanded.”

Increased carbon dioxide in the air traps more heat in the atmosphere, which is making areas farther north warmer. Mangroves are doing so well in these new areas, they’re expected to spread all across the coast of the entire Gulf of Mexico in a few decades.

“What we are witnessing is an indicator of climate change, without a doubt,” said FIU associate professor John Kominoski, an ecologist who co-authored the study.

There’s reason to cheer the mangrove expansion. Because mangroves make denser, woodier material that elevates them off the ground, Charles’ study found they are better able to trap carbon than the marsh plants they replace.