Best of Frenemies: Unexpected Role of Social Networks in Ecology 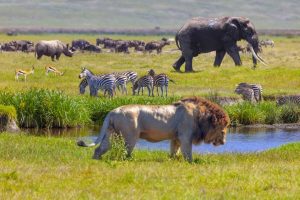 Social networking, even between competing species, plays a much bigger role in ecology than anyone previously thought, according to three biologists at the University of California, Davis.

“There’s mounting evidence that different species pay attention to each other in the wild, especially if they share predators,” said Mike Gil, postdoctoral researcher at UC Davis. “The theory of ecology has lagged behind.”

Gil and co-authors Marissa Basket, associate professor of environmental science and policy, and Sebastian Schreiber, professor of evolution and ecology, outline their new theory in a paper published in the November issue of the journal Ecology.

Gil wants to understand how populations interact with each other and change over time. Traditionally, ecologists have focused on competition between species for food and other resources.

“But we typically leave out the specifics of animal decision making and social behavior,” Gil said.