Successful invasions of non-native pests, such as wild pigs in North America, may be linked to how they use the landscape around them 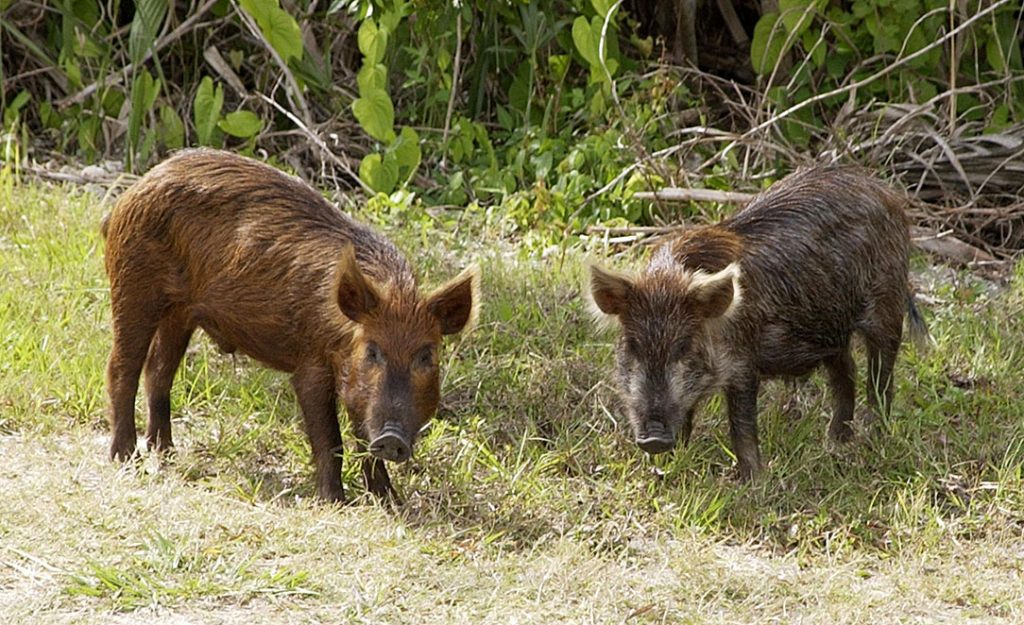 Wild pigs stop near the Kennedy Space Center Press Site in the Launch Complex 39 Area on their daily foraging rounds. Not a native in the environment, the pigs are believed to be descendants from those brought to Florida by the early Spanish explorers. Without many predators other than human, the pigs have flourished in the surrounding environs. Photo courtesy of NASA.

Domestic pigs can be cute, but invasive wild pigs – also known as feral swine – are another matter entirely. First brought to the U.S. by early European settlers, wild pigs have earned a reputation for being highly destructive creatures in North America. With few natural predators aside from humans, and the highest reproductive potential of any mammal of similar size, two to six million are wreaking havoc in at least 39 states and some Canadian provinces. In Texas alone, they do hundreds of millions of dollars in damages annually. They tear up recreational areas, occasionally even terrorizing tourists in state and national parks, and squeeze out other wildlife. In agricultural fields, wild pigs may eat the crops or indirectly damage them, or the soil, by creating wallows, scent marking, rooting up plants, or destroying fencing and equipment.

A new study in the Ecological Society of America’s journal Ecological Applications investigates how the success of a wild pig invasion may be dependent on how they use their surrounding food resources, and how when it comes to agriculture, the pigs continue their destructive trend. Crop selection and usage behavior of wild pigs in agro-ecosystems are poorly understood, and it is challenging to predict how the availability of crops and non-agricultural food – such as grasses, acorns, bulbs, mushrooms, and animal matter like insects and reptiles –might impact the success of wild pig invasions.

Understanding how, when, and why they use different food resources is important because it may be a significant contributing factor in their expansion and invasion into new ecosystems.

In previous studies, researchers typically conducted studies in a lab. In this study, researchers use landscape-scale, real-world data to study wild pig behavior in agro-ecosystems and its effects in crops and the surrounding natural landscapes.

Lead author Mark Wilber, a postdoctoral fellow at Colorado State University, and colleagues from the U.S. Department of Agriculture’s (USDA) National Wildlife Research Center and around the U.S. studied GPS data from tagged wild pigs collected from 24 previous movement studies. Data from 326 individual wild pigs were used to trace their movement and time spent in crops. The USDA keeps track of yearly crops across the country, detailed down to plots of 30 by 30 meters, and it records when those crops are planted and harvested, which is the time they are most vulnerable to being consumed by pigs. Using the GPS and detailed crop data, the researchers learned how much time pigs spent in various different crops relative to their abundance and the abundance of non-agricultural food sources. 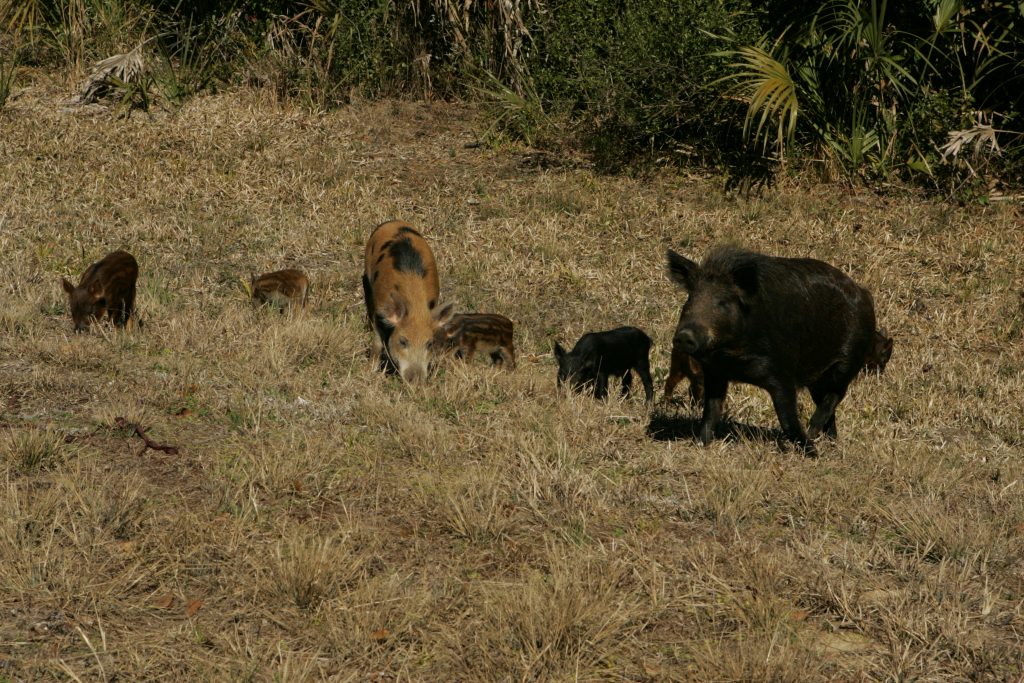 The authors expected to find that wild pigs use crops more often when other food options are scarce. They also expected to find an exponential relationship between crop availability and pig usage, where a higher abundance of crops leads pigs to exploit them much more often. This is largely because as crops become more plentiful, the benefits of using them outweigh the risks of being trapped or killed.

Many states allow hunters to kill wild pigs year-round without limits, or to capture them alive to be slaughtered, processed, and sold to restaurants as exotic meat – further complicating control efforts because it incentivizes their existence. Thousands more are shot from helicopters. The goal of USDA’s National Feral Swine Damage Management Program (NFSDMP) is to minimize damages and eradicate wild pigs where possible, says Sarah Chinn of University of Georgia.

“Managing populations is difficult because some landowners want wild pigs on their land while others don’t,” explains Chinn. “Those that have crops need to control their losses while others might want the wild pigs around for recreational hunting or even profit.” Management options for landowners include lethal removal, exclusion, repellents, and supplemental feeding (to keep pigs away from profitable crops), but lethal control is the method most used by the NFSDMP.

Wild pigs may want to avoid these crop-associated risks. So, the researchers also expected to find that pig use of crops decreases when the availability of non-agricultural food increases.

Their expectations of the study seem supported. Overall, wild pigs eat and damage agriculture more when it is highly available, but this behavior lessens when non-agricultural food sources are also highly available.

Wilber says he and his colleagues are excited to show how commonly-collected animal movement data, and publicly-available agricultural data, can be used to understand how invasive pests use and damage resources in different ecosystems, and to better predict how fast they expand into new areas. He adds, “An improved understanding of foraging behavior will help managers more effectively control invasive pests in the United States and elsewhere.”

Brook, Ryan; University of Saskatchewan, College of Agriculture and Bioresources 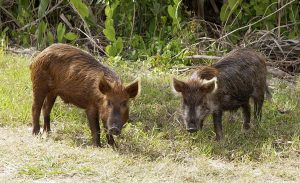