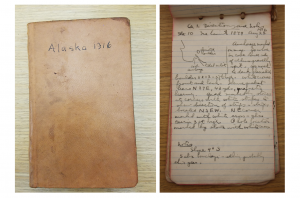 William S. Cooper’s 1916 journal with a sketch of the inlet and directions to the first quadrat. By 2016, magnetic north had shifted about 12 degrees and the inlet had shrunk substantially. Photo Credit: CU Denver

Ecologists have long tried to understand and anticipate the compositional change of plant species, especially now, as climate and land usage disrupts the way in which plants colonize and expand their communities. Called plant succession, the study of predicting plant communities through time is one of ecology’s oldest pursuits.

In 2016, Brian Buma, PhD, assistant professor of integrative biology at the University of Colorado Denver, assembled a team of researchers to hunt down and then expand eight long-forgotten, 103-year-old succession plots with a grant from National Geographic. The team discovered the plots and with the new data, revived the longest running succession study in the world.

The researchers found that the initial, random assortment of plants spent a few decades fighting for dominance and sunlight, before settling into a stable and nearly unchanging community for the next 50 years, upending the classic model of thought about succession.

The findings were published in the journal Ecology.