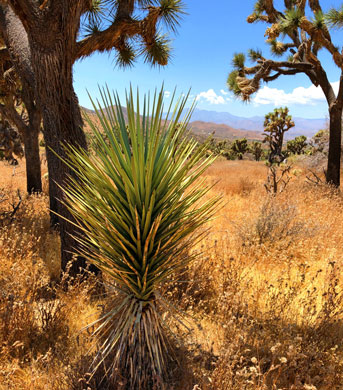 Young Joshua trees like this one may be unable to survive under climate change.
Credit: UC Riverside

They outlived mammoths and saber-toothed tigers. But without dramatic action to reduce climate change, new research shows Joshua trees won’t survive much past this century.

UC Riverside scientists wanted to verify earlier studies predicting global warming’s deadly effect on the namesake trees that millions flock to see every year in Joshua Tree National Park. They also wanted to learn whether the trees are already in trouble.

Using multiple methods, the study arrived at several possible outcomes. In the best-case scenario, major efforts to reduce heat-trapping gasses in the atmosphere would save 19 percent of the tree habitat after the year 2070. In the worst case, with no reduction in carbon emissions, the park would retain a mere 0.02 percent of its Joshua tree habitat.

The team’s findings were published recently in Ecosphere. Project lead Lynn Sweet, a UC Riverside plant ecologist, said she hopes the study inspires people to take protective environmental action. “The fate of these unusual, amazing trees is in all of our hands,” she said. “Their numbers will decline, but how much depends on us.”