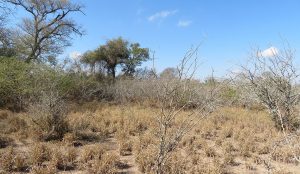 Savannas cover about 40% of the area of the tropics, yet little is known about the effects of drought on their ecosystems.  A new Yale-led study published in the journal Ecology shows that a severe drought between 2014 and 2016 in Kruger National Park in South Africa killed off a large number of trees, a finding that somewhat surprised researchers who speculated the region’s trees might be well adapted to the semi-arid environment.

“We really did not know what to expect,” said lead author Madelon Case, a Ph.D candidate in Yale’s Department of Ecology and Evolutionary Biology. “Trees can benefit from how much drought reduces grass — which competes for resources with the trees and fuels savanna fires.”

However, the new study showed the severe drought killed off trees in the savannas more quickly than trees in the forests of the Northern Hemisphere during similar dry spells, where trees often take years to die. Researchers say it is important to understand the ecosystem’s response to droughts, which are expected to become more frequent and severe with global climate change.