Is wildfire management ‘for the birds’? 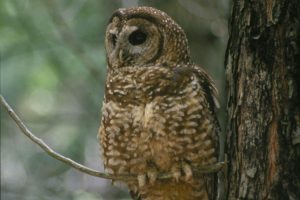 Spotted owl populations are in decline all along the West Coast, and as climate change increases the risk of large and destructive wildfires in the region, these iconic animals face the real threat of losing even more of their forest habitat.

Rather than attempting to preserve the owl’s remaining habitat exactly as is, wildfire management — through prescribed burning and restoration thinning — could help save the species, argues a new paper by fire ecologists and wildlife biologists and appearing today (July 2 ) in the journal, Frontiers in Ecology and the Environment.

The paper compares the plight of the owl with that of another iconic threatened species, the red-cockaded woodpecker, which has made significant comebacks in recent years — thanks, in part, to active forest management in the southern pine forests that the woodpecker calls home. Though the habitat needs of the two birds are different, both occupy forests that once harbored frequent blazes before fire suppression became the norm.