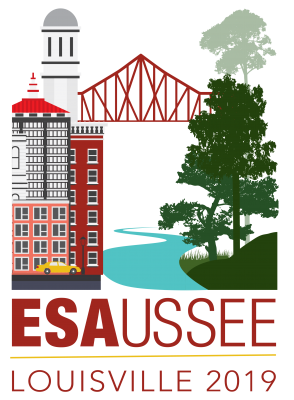 Just as lions are apex predators on land, lionfish in Florida are an underwater force to be reckoned with. The biggest threat they pose, however, is not their venomous spines. It is the alarming speed and ferocity with which they invade new waters, eating prey that have not evolved to recognize them as a predator, stealing food from important commercial fish like snapper and grouper, and spawning baby lionfish at incredible rates.

In the 1980s, lionfish (native to the South Pacific and Indian Ocean) were introduced to Floridian waters, possibly by humans who bought them as exotic pets and later released them to the ocean. Over the next decades they spread rapidly, and today they have thoroughly invaded their preferred warm waters in the Atlantic, Gulf of Mexico, and Caribbean, damaging the native coral reef systems and food webs. 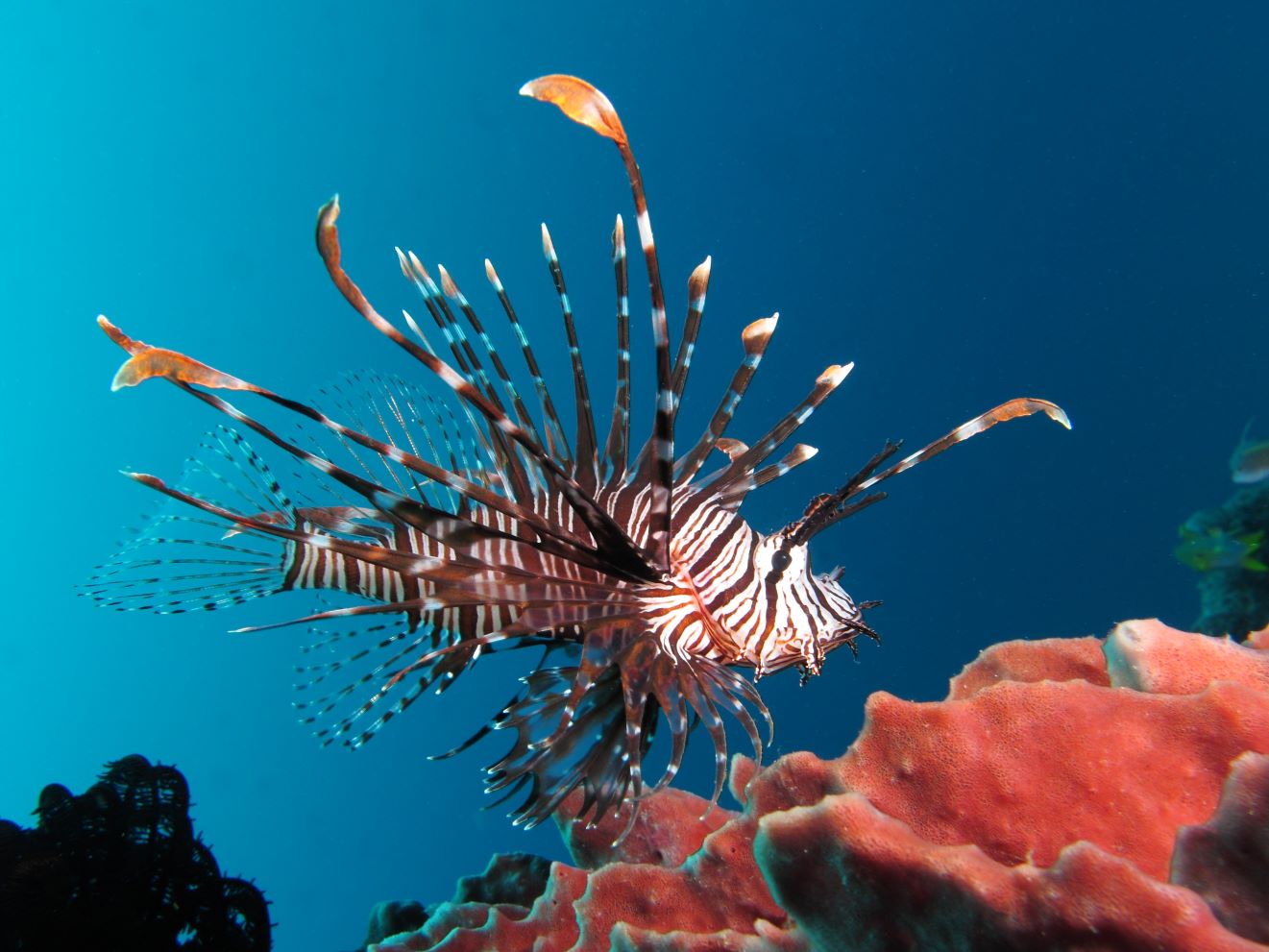 “The destructive nature of the lionfish invasion is partly to blame on their reproductive success,” says Montana Airey, a masters student at Columbia University who studies lionfish. “They can produce thousands of eggs every week, which after hatching can spread widely on ocean currents. Also, since they are invaders, their prey don’t recognize them as dangers, so they can eat without much effort.”

As adults, lionfish tend to be slow-moving and stay local, not straying far from their settled reef home. The invasiveness of lionfish is therefore thought to happen when they are small, larval fish being carried to new places by currents. However, researchers have little information about how grown lionfish might invade or move to new waters because tracking small marine organisms poses difficulties.

One way to investigate their movements, though, is to study their ear-bones.

Lionfish ear-bones, or otoliths, grow over time in the way tree-rings do. “Since otoliths have growth rings related to their age,” Airey explains, “we can look at different parts of the otolith to understand the fish’s life at different points in time. The otolith core is the fish’s juvenile growth and the outer rim is the most recent growth.”

Airey studies otoliths of lionfish captured at various depths and habitat types (such as coral reefs or sandy bottoms) along the Gulf Coast of Florida and the Florida Keys. She looks at carbon and oxygen atoms in the otolith layers, specifically analyzing the makeup of stable isotopes – a version of an atom, in this case an oxygen or carbon atom, which has equal numbers of protons and neutrons in its nucleus and is therefore balanced and non-radioactive. The chemical traits of stable isotopes make them extremely useful in environmental studies investigating detailed records of past water conditions. 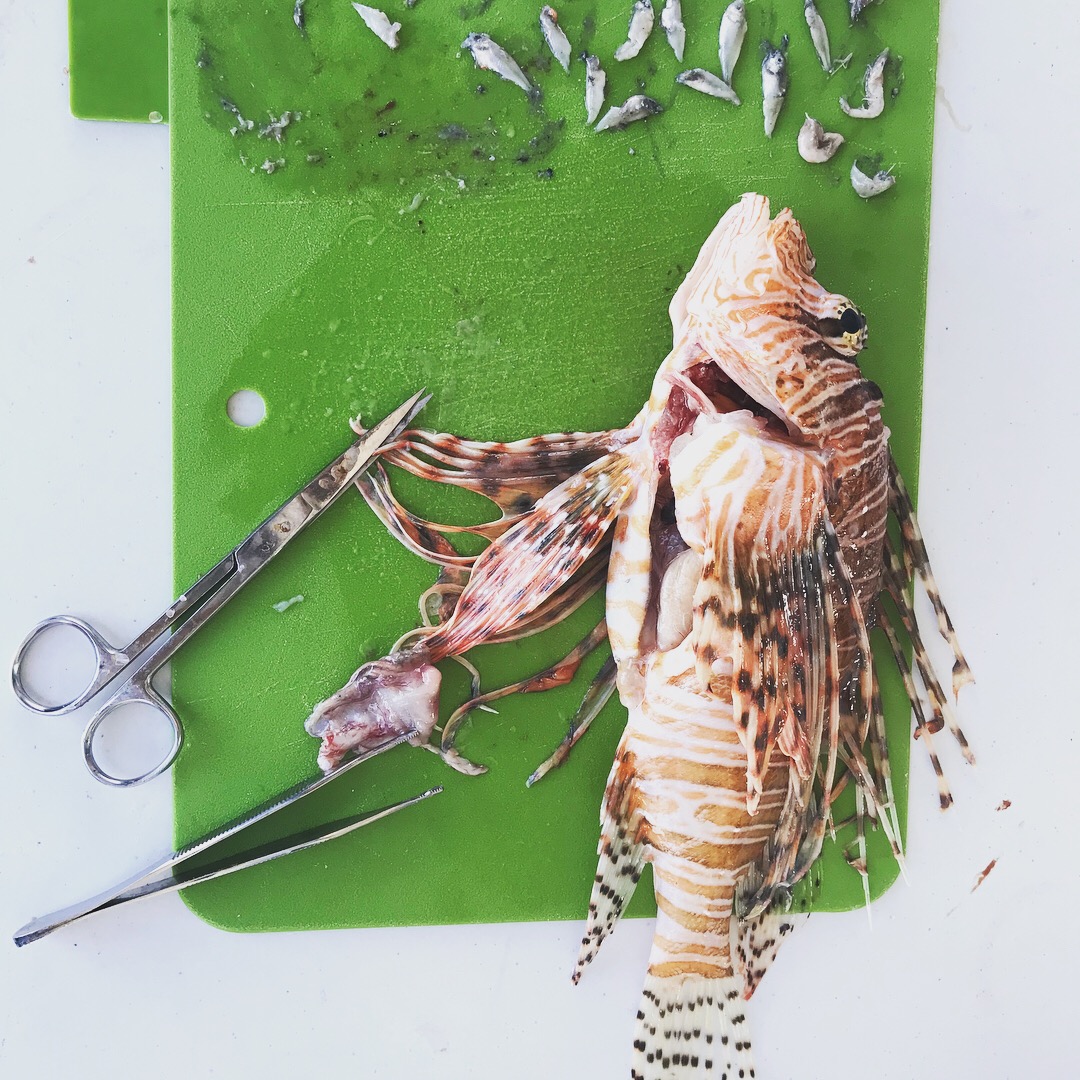 Airey dissects lionfish captured at different depths and habitats to find out where they have lived. Photo courtesy of Montana Airey.

The makeup of stable isotopes in each otolith layer is dependent on water temperature and the type of algae or plants present throughout the fish’s life. Because water temperature and type of algae changes with water depth, Airey can determine where a lionfish has lived, and she creates a profile of movement between a lionfish’s larval settlement location and its home when caught.

Airey hopes these data will reveal how often lionfish move away from certain water depths, what proportion stay local (also called “site-specific”), and what habitat type they tend to migrate towards. In preliminary results she will present at the August meeting of the Ecological Society of America, she found something unexpected.

“Lionfish have been shown to be very site-specific,” she says. “But I observed many individuals with compositions in their otoliths that suggest they moved some distance at least once throughout their life.”

If adult lionfish are more mobile than previously thought, the strategies for management of this invasive species could become even more complex. Understanding their choice of habitat once they grow up can help managers to more effectively focus their removal and conservation efforts.

Airey’s research is the first to use this stable isotope analysis to explore settlement and migratory behavior of lionfish in their invaded waters. “Lionfish weren’t commonly studied in their native habitat before the invasion began,” she adds. “I feel that stable isotopes are a strong tool to be used in studies, like my own. They allow us to ‘see’ general patterns underwater that we would have a hard time actually seeing otherwise.”

This contributed talk, “Ornate Invaders: The movements of invasive lionfish (Pterois volitans) in Floridian coastal waters,” is part of a session all about invasive species. Other presentations in the session include:

Ecologists from 50 U.S. states, U.S. territories, and countries around the world will converge on Louisville, Kentucky this August for the 104th Annual Meeting of the Ecological Society of America. Up to 3,000 attendees are expected to gather for thousands of scientific presentations on breaking research and new ecological concepts at the Kentucky International Convention Center, August 11-16, 2019.

The Opening Plenary features Karen Warkentin, professor in the Biology Department and the Women’s, Gender & Sexuality Studies Program at Boston University, who will speak about, “All the variations matter: bridging disciplines and communities to study diversity in life history and sexual behavior.” The event is free and open to the general public.

The Ecological Society of America, founded in 1915, is the world’s largest community of professional ecologists and a trusted source of ecological knowledge, committed to advancing the understanding of life on Earth. The 9,000 member Society publishes five journals and a membership bulletin and broadly shares ecological information through policy, media outreach, and education initiatives. The Society’s Annual Meeting attracts 3,000 – 4,000 attendees and features the most recent advances in ecological science. Visit the ESA website at https://www.esa.org.

We can connect you to ecological scientists who are available for interviews and for providing on-call expertise to members of the media. Learn more»
This website uses cookies to improve your experience. We'll assume you're ok with this, but you can opt-out if you wish.Accept Read More
Privacy & Cookies Policy