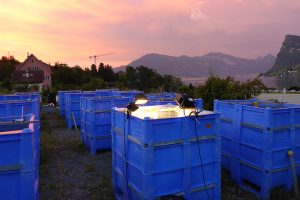 Research by an evolutionary biologist from Florida State University has shown parasites have important and far-reaching effects on predatory fish and the ecosystems they inhabit.

These findings, published this week in the journal Ecology, provide important evidence for the little-studied role of parasites in trophic cascades, which are powerful, indirect interactions that can affect entire ecosystems.

“A trophic cascade occurs when predators do something that affects everything below them in the food chain,” said lead author Jaime M. Anaya-Rojas, a postdoctoral researcher at Florida State. “Parasites, on the other hand, are everywhere and can be found at all trophic levels of an ecosystem. With this study, we show parasites are important players in the ecological theater and sometimes determine what predators can do. In so doing, they influence predators’ effects on their ecosystems.”

During the five-year study, researchers from the U.S., Switzerland, England and Portugal focused on a small, predatory species of fish known as the three-spined stickleback, which inhabits coastal waters and freshwater bodies throughout the Northern Hemisphere. The three-spined stickleback is a major research organism for evolutionary biologists seeking to understand genetic changes involved in environmental adaptation and the complexity of host-parasite interactions.