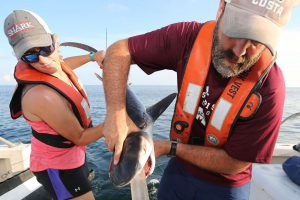 Tiger sharks have a reputation for being the “garbage cans of the sea”—they’ll eat just about anything, from dolphins and sea turtles to rubber tires. But before these top predators grow to their adult size of 15 feet, young tiger sharks have an even more unusual diet. Scientists have just announced in a new paper in Ecology that baby tiger sharks eat birds. And not seabirds like gulls or pelicans—familiar backyard birds like sparrows, woodpeckers, and doves.

“Tiger sharks will see an easy meal and snatch it up, but I was surprised to learn that the sharks were eating songbirds—I assumed that they’d be seabirds,” says Kevin Feldheim, a researcher at Chicago’s Field Museum and a co-author of the study who led the DNA analysis that told the researchers what kinds of birds the sharks were eating. “It was one of the coolest projects I’ve been associated with using DNA to tell a story.”