Thursday, 2 May 2019
For Immediate Release

Get a sneak peek at these new scientific papers, publishing on May 6, 2019, in the Ecological Society of America’s journal Frontiers in Ecology and the Environment. 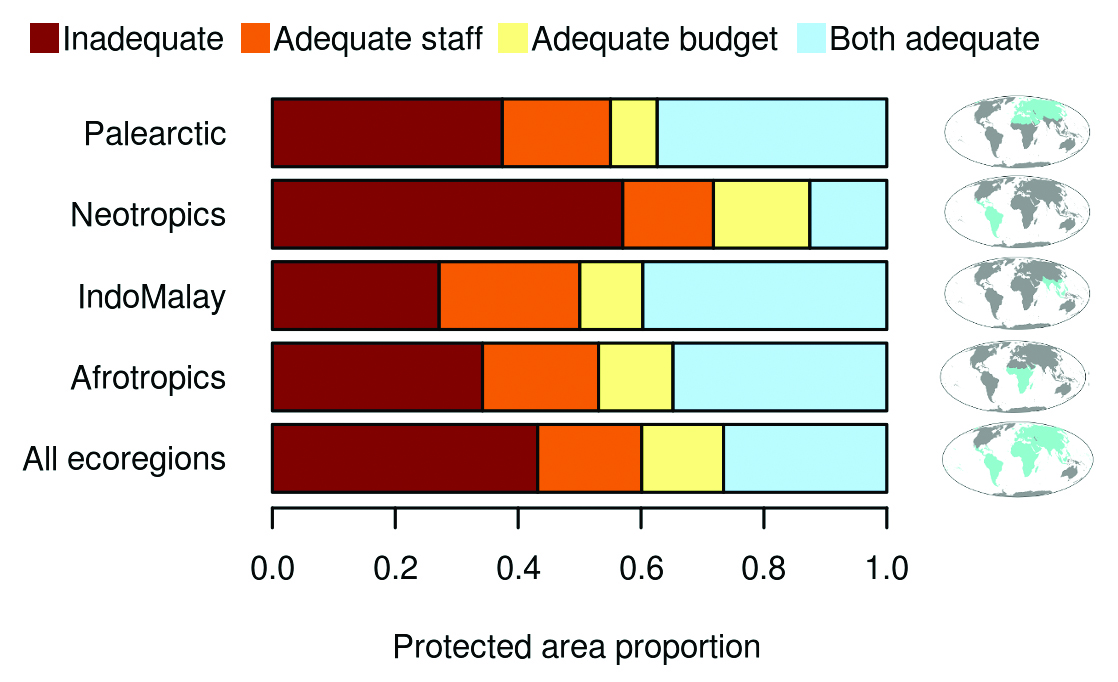 Back in 2010, park rangers may have expected to spend the following ten years carrying out anti-poaching patrols in new nature reserves and responding to invasive species threats over larger ranges. A multilateral treaty – The Convention on Biological Diversity (CBD) – had just resolved to increase the worldwide coverage of protected areas (PAs), which are meant to safeguard habitats and species from human impacts. But a new study suggests that understaffing and major funding gaps (to the tune of US$70 billion in annual shortfalls, during some periods) are making the growing number and size of PAs less effective than they should be. An analysis of nature reserves, wilderness areas, and national parks shows that nearly half of PAs report inadequate staffing and budget resources, and that adequately funded PAs only protect sufficient amounts of habitat for fewer than 10% of their resident amphibian, bird, and mammal species. When measuring progress toward its biodiversity protection goals, the CBD risks sending a false message about conservation success in 2020 and beyond. 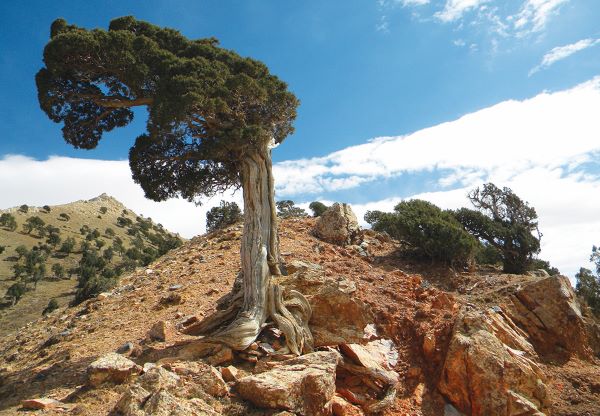 An old Qilian juniper tree grows among thin and stony soils. Photo courtesy of B Yang.

Scattered across China’s vast expanse of mountains and stony soils, a few ancient woody sentinels somehow manage to keep growing, year after year, as they have for more than a thousand years. But if certain areas are especially likely to harbor very old trees, it is not clear where those hot spots are. Researchers from Zhejiang University, The Chinese Academy of Sciences, and Australian National University mapped the locations of 187 trees across China that were at least 1000 years old and found a highly significant relationship between tree age and elevation. China’s oldest known living tree, for example – a 2230-year-old Qilian juniper – grows on a mountain slope 4000 meters above sea level. These remote, high-elevation areas tend to be less likely to face human disturbance, but they do face continued threats from drought and climate change. Can China’s oldest trees continue to “lie low” on the high mountain slopes? 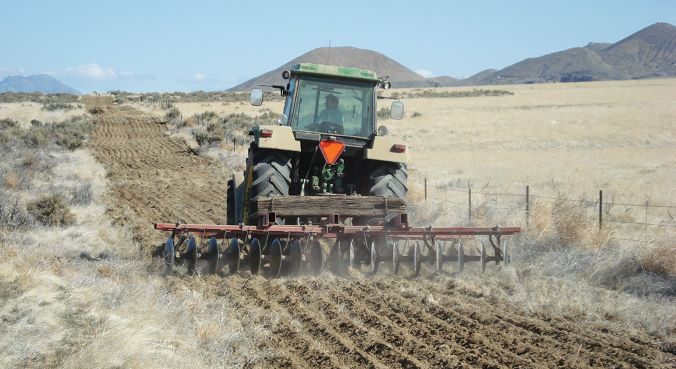 One example of a commonly used linear fuel break in the Great Basin is brown strips, which require intensive and frequent maintenance (eg plowing, herbicides) to prevent persistent re-invasion of non-native plants. Photo courtesy of the US Bureau of Land Management.

Scrubby stands of sagebrush support all kinds of species – grouse, pygmy rabbits, badgers, coyotes – but in many sagebrush landscapes, wildfires have paved the way for invasive grass species to move in. In shrub-steppe landscapes of the western US, land managers have been mowing down vegetation along many thousands of kilometers of roads and fences, creating relatively barren strips of land that are supposed to make it harder for wildfires to spread. However, the effectiveness of this strategy in this particular ecosystem has not been widely studied, and researchers from USGS, USDA, and Colorado State University hope to highlight some of the uncertainties surrounding it. Open strips of land might make it easier for predators like coyotes to move around and hunt – but they can also make it harder for grouse to migrate to different areas to reproduce or forage. The fuel breaks might prevent grass invasions that are aided by wildfire, but mowed areas can also be more easily invaded. Whether the fuel breaks will ameliorate wildfire-related issues or create a new suite of problems remains to be seen. 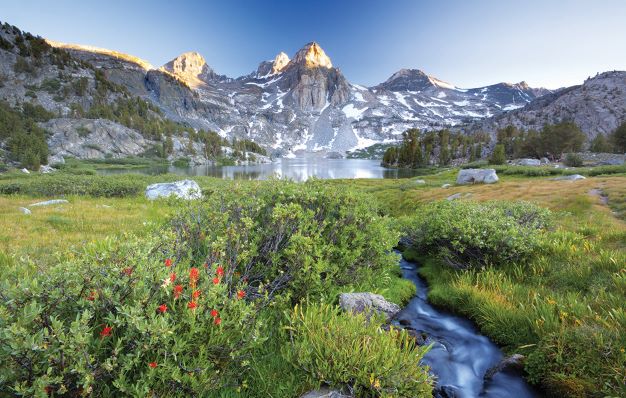 Potential climate refugia in Sierra Nevada montane meadows, based on changes from historical climatic conditions. Refugial meadows tended to be higher in elevation and featured more connections to other meadows. Photo courtesy of J Pang; CC BY 2.0.

In the future, many species will find the climate conditions in their current habitat inhospitable – but if a population is surrounded by cities or degraded landscapes, where else can it go? Climate adaptation efforts have started to focus on ways to build movement routes for species that are “blocked in.” But a group of researchers from the University of Washington have noticed a problem with many of these routes – they connect “environmental migrant” species to areas that currently experience the types of conditions they will need going forward, instead of identifying areas that are predicted to look that way in the future. Building pathways to destinations that don’t yet exist is complicated, but several approaches for mapping new routes will allow researchers to make more accurate predictions about future safe havens.

Wildfires as an ecosystem service 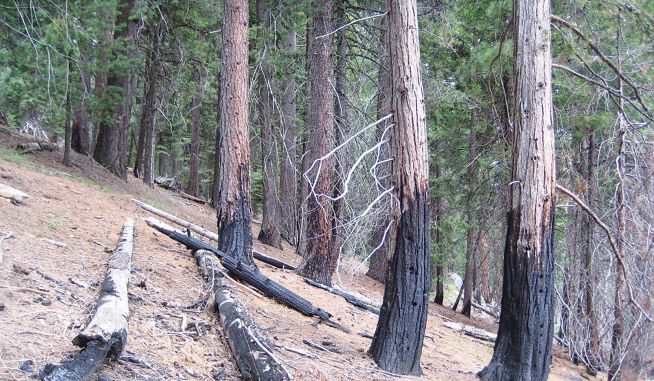 In forests, frequent understory wildfires reduce vertical fuel buildup and prevent the occurrence of large, high-intensity fires that are often catastrophic to both the forest and human communities. Photo courtesy of J Pausas.

Ancestral hominids were exposed to fire on open savanna landscapes, and humans eventually learned to control fire. Since then, fire has been key in the evolution of our social behavior – it has been used to create farmland and open spaces for grazing and hunting, to control pests, and to enhance pollination activity, as well as other benefits. In a new paper, ecologists from the USGS and the University of Valencia’s Desertification Research Center outline the importance of fires, both natural and prescribed, for the functioning of ecosystems and the support of biodiversity.

The Ecological Society of America, founded in 1915, is the world’s largest community of professional ecologists and a trusted source of ecological knowledge, committed to advancing the understanding of life on Earth. The Society publishes five journals and a membership bulletin and broadly shares ecological information through policy, media outreach, and education initiatives. The Society’s Annual Meeting attracts 3,000-4,000 attendees and features the most recent advances in ecological science. Visit the ESA website at http://www.esa.org. 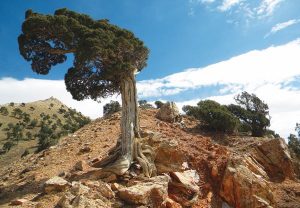