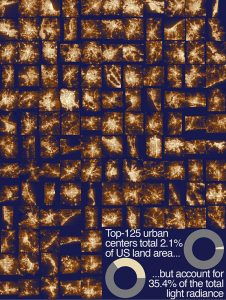 An estimated 600 million birds die from building collisions every year in the United States. Scientists at the Cornell Lab of Ornithology have published new research highlighting artificial light at night as a contributing factor. They’ve ranked metropolitan areas where, due to a combination of light pollution and geography, birds are at the greatest risk of becoming attracted to and disoriented by lights and crashing into buildings. The research was published today in the journal Frontiers in Ecology and the Environment.It combines satellite data showing light pollution levels with weather radar measuring bird migration density.