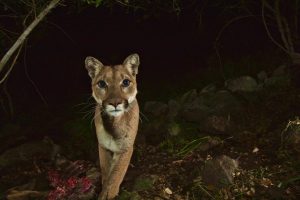 Two isolated mountain lion populations in Southern California’s Santa Ana and Santa Monica Mountains are at risk of local extinction, perhaps as soon as within 50 years, according to a study published in the journal Ecological Applications.

The study showed the extinction risk is due to low genetic diversity and mortality that affects the stability of the population. Mountain lion mortality is often caused by humans, but can also result from  changes in the environment, such as wildfire and fluctuations in prey density.