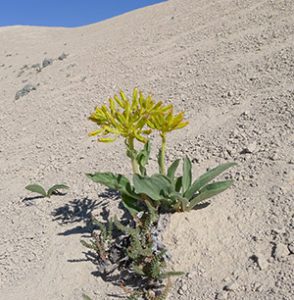 A rare plant found only at two sites in central Wyoming has persisted, in part, because it can recover from relatively low densities and grows at different rates within each location, according to new research led by a University of Wyoming scientist.

The desert yellowhead, which grows on fewer than 55 acres in the Beaver Rim area of Fremont County, has been listed as a threatened species under the Endangered Species Act since 2002. The new research, published by lead author Reilly Dibner, a postdoctoral researcher formerly at UW’s Haub School of Environment and Natural Resources, provides insights into how the plant has managed to survive in small, stable numbers. But the scientists say its long-term future is difficult to predict because of increasingly variable rainfall patterns and warming.

The research paper appears today in Ecological Monographs, a scientific journal of the Ecological Society of America. Other authors are from the University of Colorado-Boulder and Duke University.