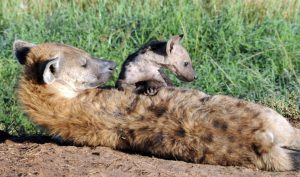 African carnivores face numerous threats from humans. So, it’s a fair assumption that the presence of more humans automatically equates to decreases across the board for carnivores.

New research led by Michigan State University and published in the current issue of Ecological Applications, however, shows that’s not always the case. The truth is some species decrease while others increase, which reveals how varying conservation and management policies can impact carnivores.

Matthew Farr, MSU quantitative ecologist and lead author of the study, sought to evaluate how a community of carnivores in Kenya’s Masai Mara National Reserve were influenced by human disturbance and differential management. The Kenyan reserve is divided into two sections by the Mara River. On the western side, known as the Mara Triangle, stricter enforcement policies result in low levels of human disturbance, which work to keep the area relatively pristine. A subsection of the eastern side, known as the Talek region, however, experiences many human incursions, from cattle herders to throngs of tourists. The stark differences are captured by Google Earth, which shows multiple trails carved into the Talek region where cattle commute to graze.