In the face of declining numbers of insects across the globe, scientists continue to expand our knowledge about invertebrate organisms and their biodiversity across the globe. Insects are the most abundant animals on planet Earth – they outweigh all humanity by a factor of 17. Their abundance, variety, and ubiquity mean insects play a foundational role in food webs and ecosystems, from the bees that pollinate the flowers of food crops to the termites that recycle dead trees. With insect populations dwindling worldwide, there are still new species being discovered. 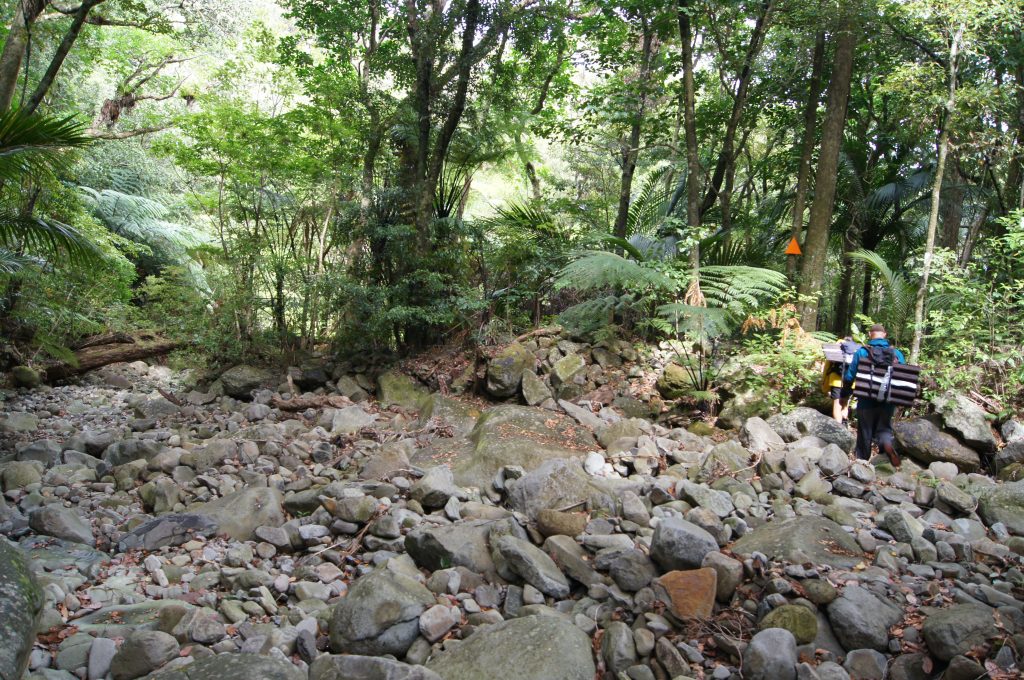 The researchers cross a dry stream bed on the remote island of Hauturu, in search of samples. Photo courtesy of Andrew Dopheide.

Researchers on the remote forested island of Hauturu, New Zealand (also known as Little Barrier Island) have compiled a staggering inventory of invertebrate biodiversity using DNA sequencing, adding a significant number of invertebrates to GenBank – an open access database of all publicly available DNA sequences. The results are published this week in the Ecological Society of America’s journal Ecological Applications.

The number of invertebrate species that exist globally is uncertain, and it is difficult to characterize entire invertebrate communities using traditional methods that require the examination of individual specimens by an expert taxonomist.

This is where DNA sequencing comes in. This method is hailed as a tool for resolving the biodiversity of earth’s underexplored ecosystems. It allows for the identification of invertebrate specimens based on more efficient molecular analysis.

Andrew Dopheide – a researcher at the University of Auckland – and colleagues employed a combination of old-school field biology with next-generation DNA sequencing to explore the use of combined datasets as a basis for estimating total invertebrate biodiversity on Hauturu island. They collected specimens from leaf litter samples, pitfall traps, and the soil itself.

At the end of the study, they estimated that the above-ground community of invertebrates includes over 1000 arthropod species (having an exoskeleton, a segmented body, and paired jointed appendages), of which 770 are insects, and 344 are beetles.

The soil they sequenced yielded even richer samples. Soils are a promising substrate for DNA analyses of biodiversity because they contain diverse communities of organisms as well as biological debris including DNA molecules. Scientists know much less about soil communities than about above-ground communities. 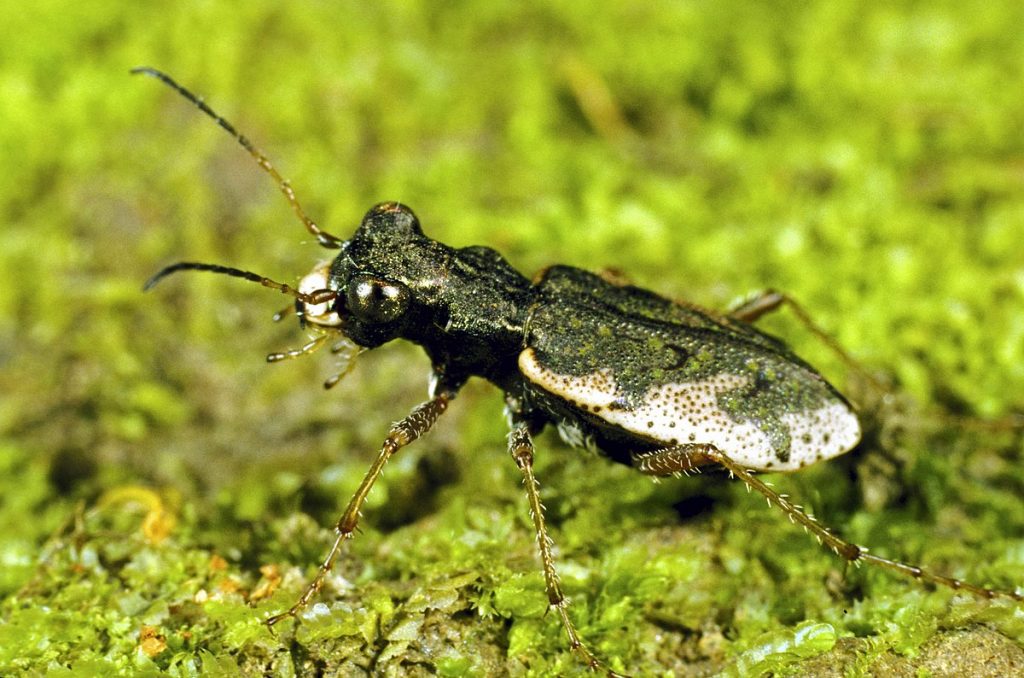 A Tiger beetle (Neocicindela parryi) in New Zealand. Beetles were the most abundant invertebrate group sequenced in this study. Photo by John Marris, Lincoln University.

From the soil samples they were able to estimate 6856 arthropod species (excluding mites), of which almost 4000 are insects.

Beetles (order Coleoptera) were most abundant, followed by sawflies, wasps, bees and ants (order Hymenoptera), flies (Diptera), butterflies and moths (Lepidoptera), and various Amphipoda – a diverse order of small, shrimp-like crustaceans that mostly occur in the ocean, but also in freshwater and some terrestrial habitats.

In total, they added over 2500 new DNA sequences to GenBank, which houses data from more than 100,000 distinct organisms, and has become an important database for research in biological fields.

“We were surprised that so few of the invertebrates were already represented in GenBank,” said Dopheide, “which suggested that we had recovered mostly new or little-studied species despite using very traditional collection methods, and emphasized the lack of knowledge about these important organisms… It’s likely that many of the invertebrates without DNA sequences in GenBank are indeed new species, but we don’t know for sure.”

With insect populations dwindling worldwide, at least there are still new species being sequenced and documented. This work by Dopheide et al. has marked the trail, and set the bar, for mixing old-school natural science with DNA sequencing to characterize species that dominate the structure and function of ecosystems… while marveling at how many of them are beetles.