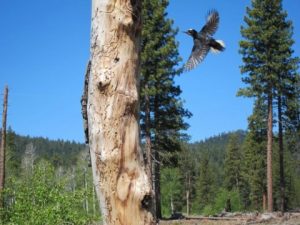 How wildlife respond to climate change is likely to be complex. To better understand the effects of climate change on the bird community in the Sierra Nevada region, new research published today from Point Blue Conservation Science examines the impacts to birds from a recent extreme drought (2013-2016). The drought resulted in the widespread death of pine trees due to attacks by bark beetles, potentially impacting wildlife habitat. While the results were varied, researchers found that many bird species responded positively to the climate conditions associated with the drought, potentially offsetting the negative habitat impacts of the dead trees.

Under the assumption that climate conditions and species’ responses to those conditions during the drought are similar to those that may occur in the future, researchers assessed the influence of temperature, water deficit, and tree mortality on bird abundance for 45 species. Researchers then used those models to project the effect of climate change on the bird community through the year 2050.