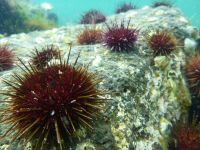 Monitoring of sea urchins in Port Phillip Bay over a four-year period has revealed that booming urchin populations and the barren grounds they created by overgrazing kelp beds are likely to persist in the long term unless drastic action is taken.

High-density populations of the Australian urchin Heliocidaris erythrogrammahave been monitored in Port Phillip Bay since 2009 by University of Tasmania and Reef Life Survey divers, after first being documented in the 1980s.

New research led by Institute for Marine and Antarctic Studies (IMAS) researcher Dr Scott Ling, published in the journal Ecology, studied urchin growth and population dynamics at five sites in distinct regions of the bay and found the urchins have the potential for further future population growth and destruction of kelp beds.