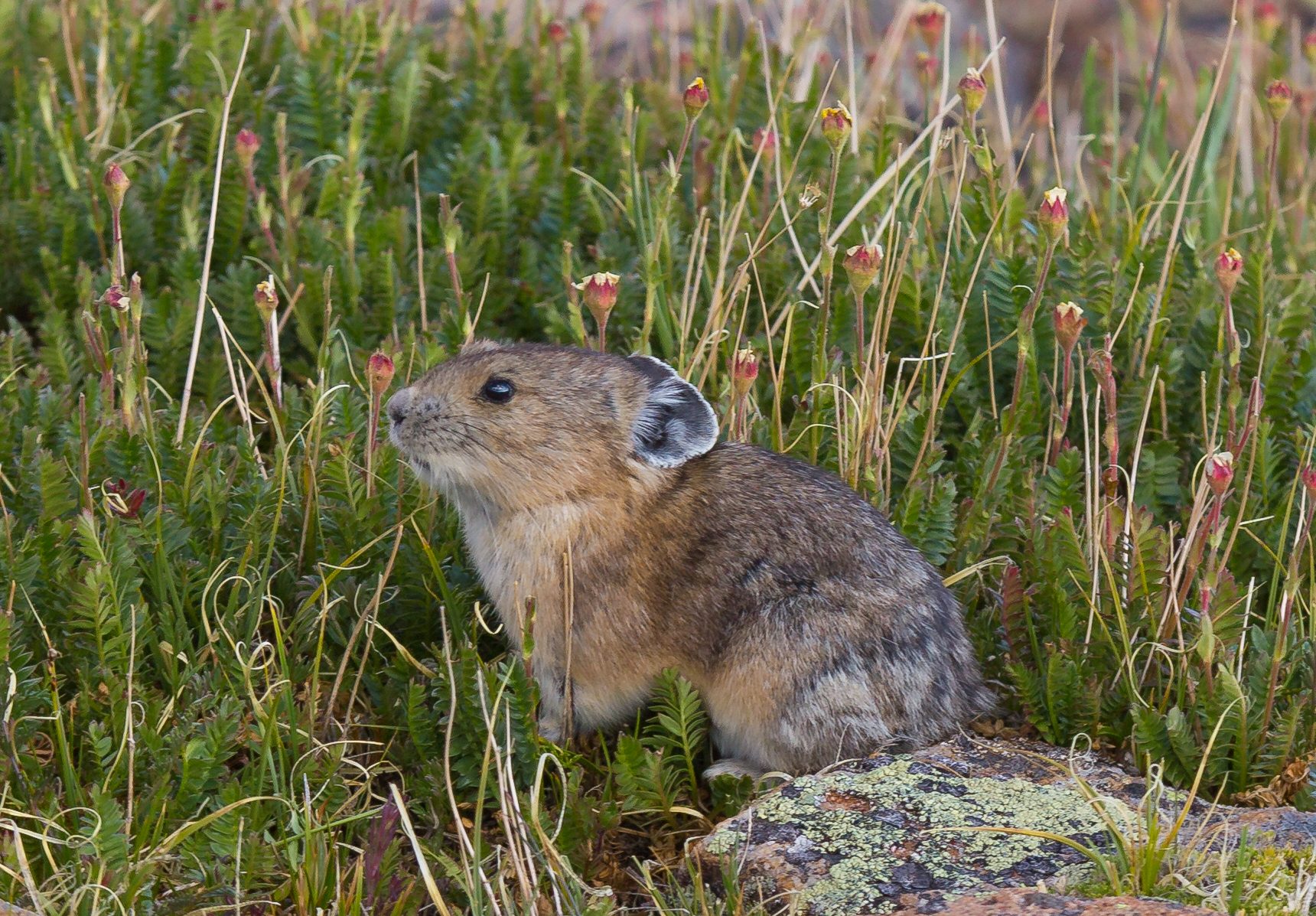 An American pika pokes its head above the grass in New Mexico. Photo courtesy of Thomas Barlow.

Although it has been ranked as the cutest creature in US National Parks, the American pika is tough, at home in loose alpine rocks in windswept mountain regions. Related to rabbits and hares, pikas live in cold, wet climates and high terrain, spending winters in snowy homes living off of stored grasses and other forage they have gathered, only venturing out for more when weather permits.

Unfortunately for these adorable little mammals, they have a fairly severe sensitivity to overheating – they die if they are exposed to temperatures above 77°F for longer than six hours. Due to their lethal threshold for heat stress, pikas are indicators of how changing environmental conditions can affect mountain-dwelling species.

It might appear that the danger for pikas lies mostly with increasing temperatures and summer heat extremes. In some cases, however, decreased snowpack and lower air moisture may threaten pikas more.

A team of researchers lead by Aaron N. Johnston of the U.S. Geological Survey sought to understand how climate change, specifically changes in snowpack and VPD, is affecting pikas. In a paper published recently in the Ecological Society of America’s journal Ecology, they related population abundances to weather and snowpack dynamics in the North Cascades National Park Service Complex in Washington state. In the Pacific Northwest, a place with mild summers and prevailing cool, moist conditions, pikas occur at unusually low elevations including near sea level. 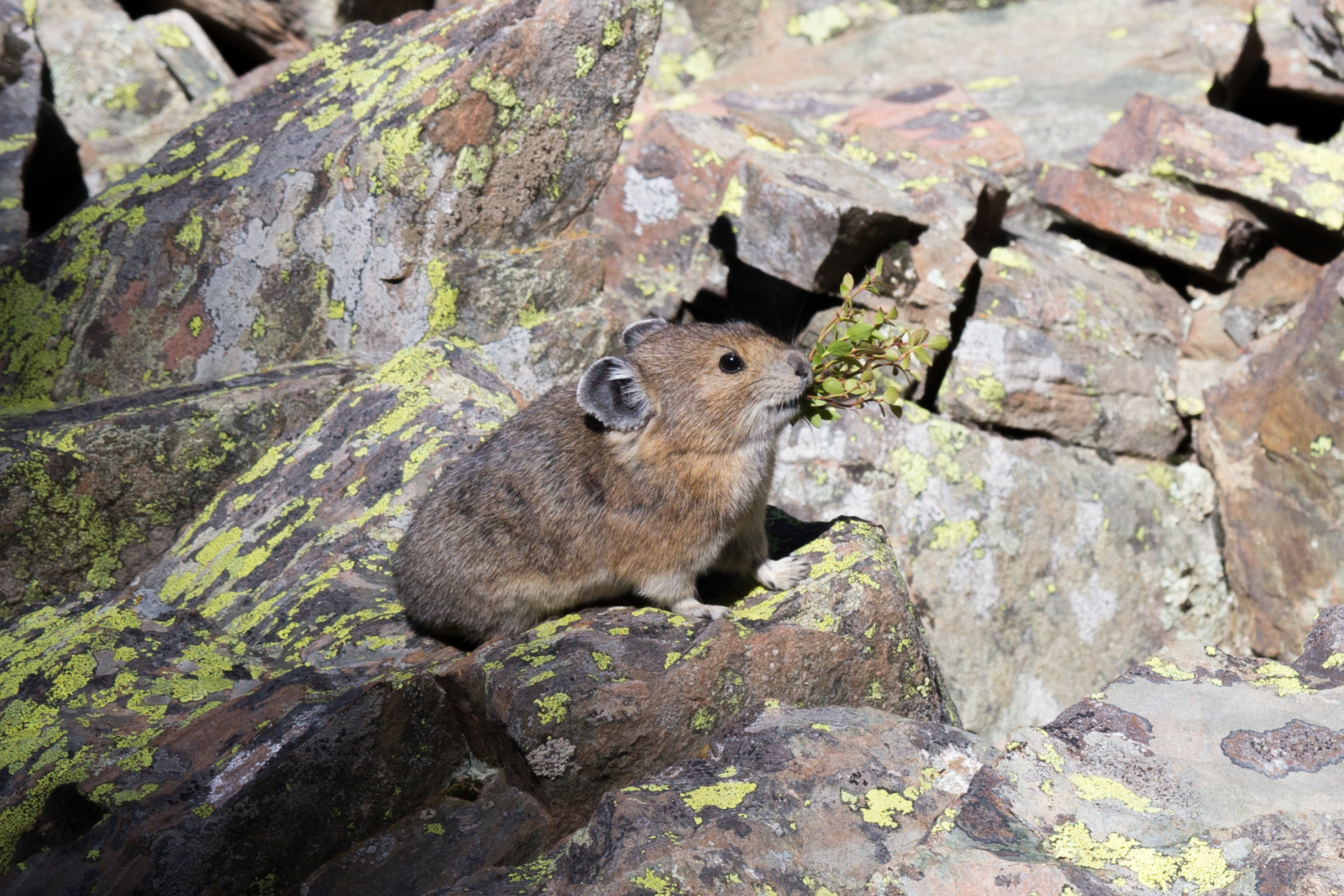 A pika carries a mouthful of forage in decent weather, possibly to store it away in its home. Photo courtesy of Thomas Barlow.

The study period included a year with record-low snowpack and high VPD (very dry air) in winter of 2014-2015, a data point that provided valuable observations of these variables’ influences on the ecosystem. The researchers further studied the dynamics across differing elevations – low, middle, and high.

The results were surprisingly variable, with different dynamics acting over different elevations.

“We expected snowpack to be an important factor because it has many important ecological functions for pikas,” said Johnston. “The effect of VPD in winter was a big surprise.”

At the lowest elevations, populations declined markedly. Unusually high VPD during the snow drought dried up forage plant species accustomed to moist conditions, and lack of food may have prompted malnourished pikas to forgo reproduction. Cold exposure did not appear to affect these pikas, where absence of snowpack is common because of generally warm temperatures.

At middle elevations, it was cold stress, not dry air, that had the biggest effect. Along a narrow elevation band, about 1200-1500 meters, pika populations lacked a strong snowpack in which to seek shelter and insulation from extreme cold. However, it was a dip in reproduction the following year, not pika mortality in a single winter, that caused the population abundance to drop. Pikas may have even resorbed fetuses in response to the cold stress of the snow drought. 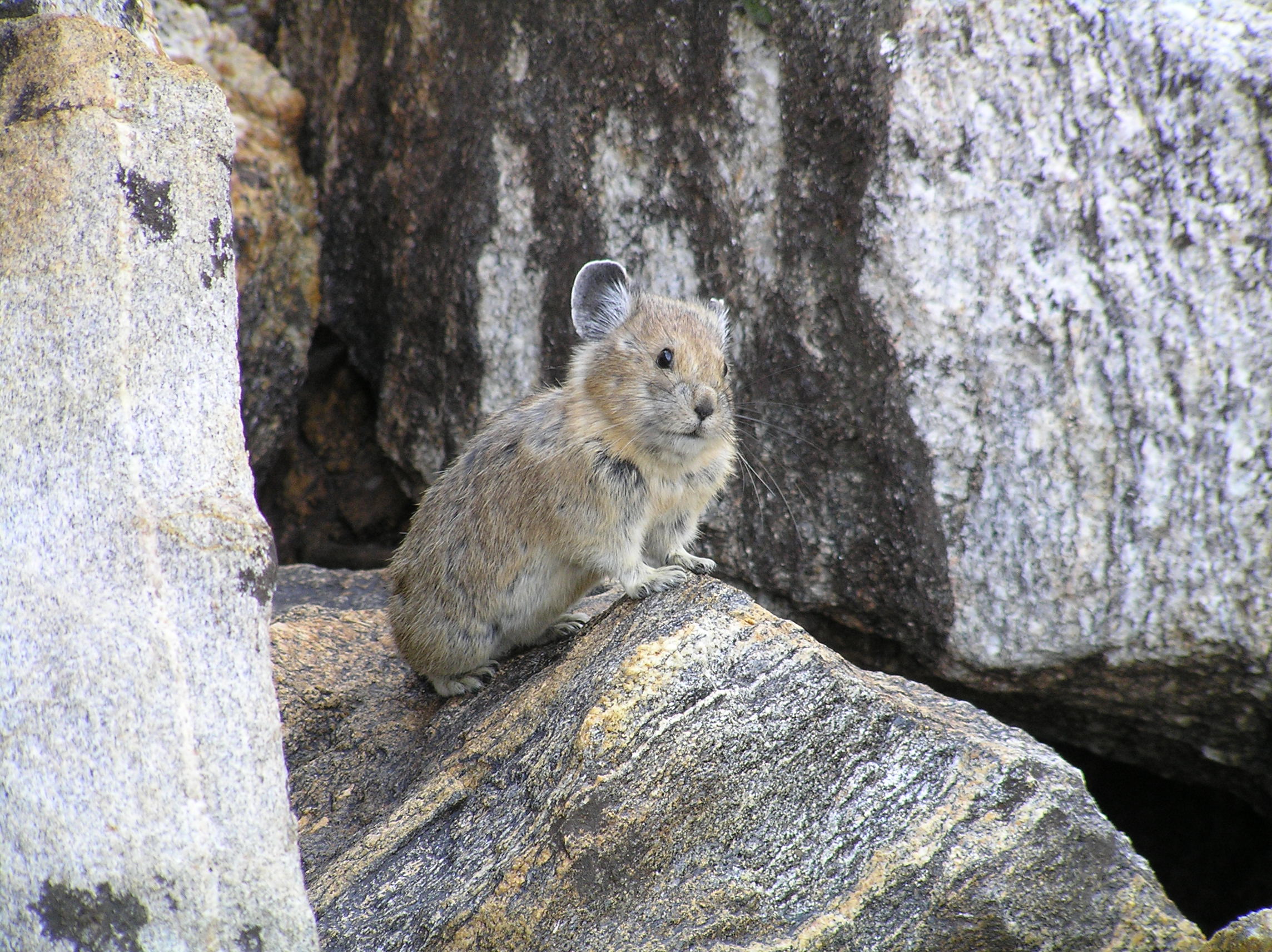 With their sensitivity to overheating, pikas are an indicator species for how climate change may affect mountain-dwelling wildlife. Photo courtesy of Shana Weber.

At high elevations, where snow often persists for up to 7-9 months, forage came back into play as the important driver of abundances. Populations increased, having had sufficient snow cover for insulation despite a snow drought, and having benefitting from increased forage availability due to earlier snowmelt and a longer growth season for food. Pikas were able to consume and collect enough food to increase their health and ability to produce many offspring over the following winter.

Given the pervasive influence of moisture on the physiology of plants and animals, the authors find the lack of previous studies on animal responses to VPD surprising.

“Moisture is distinct from climatic factors of temperature and precipitation that are commonly used to explain animal distributions,” Johnston stated. “Incorporating moisture into species distribution models should improve ecological understanding of species and their responses to climate change.”

Climate-indicator species like pikas provide a number of ecosystem services and play an important role in biodiversity. Pikas serve as a food source for a number of predators, including weasels, coyotes, and birds of prey. They are also ecosystem engineers – their foraging helps promote the diversity and distribution of various plant species and nutrients. Consequently, pika die-offs could have many lasting dire consequences for the environment and serve as a harbinger in forecasting potential climate change impacts on animal and plant life across the greater continental US.

As extreme events like snow drought continue to increase in frequency, how these events and their interactions with VPD will affect animal species remains largely unexplored. Support for continued research into climate indicator species such as the pika is critically important.