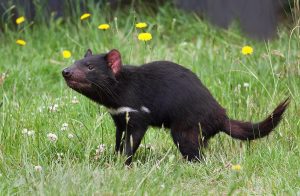 A new study of Tasmanian devils has revealed that a transmissible cancer which has devastated devil populations in recent years is unlikely to cause extinction of the iconic species.

New research led by Dr Konstans Wells from Swansea University has revealed that it is more likely that the disease will fade-out or that the devils will coexist with Tasmanian Devil Facial Tumour Disease (DFTD) in future.

DFTD typically kills the majority of devils it infects and has wiped out around 80% of wild devils with continuous decline of existing populations since the disease was first identified.

An international team of scientists from the UK, Australia and the USA matched field epidemiological evidence from wild populations collected over a 10-year period in north-west Tasmania with simulation studies, which revealed that DFTD is unlikely to continue causing ongoing population declines of Tasmanian devils in future.

They say the findings of their study, published in Ecology, offers much-needed hope that the species, which is the world’s largest remaining marsupial carnivore, will not necessarily become extinct due to DFTD.