Arctic sea ice is now declining at a rate of 12.8 percent per decade – 2012 had the lowest amount of summer ice on record. The drastic change has numerous implications for Arctic ecosystems, from increased shipping – the first commercial container ship crossed the Arctic Ocean in fall 2018 – to changing food webs.

But for ringed seals across the Arctic, it’s not the lack of ice that will hurt them most – it’s the lack of snow. 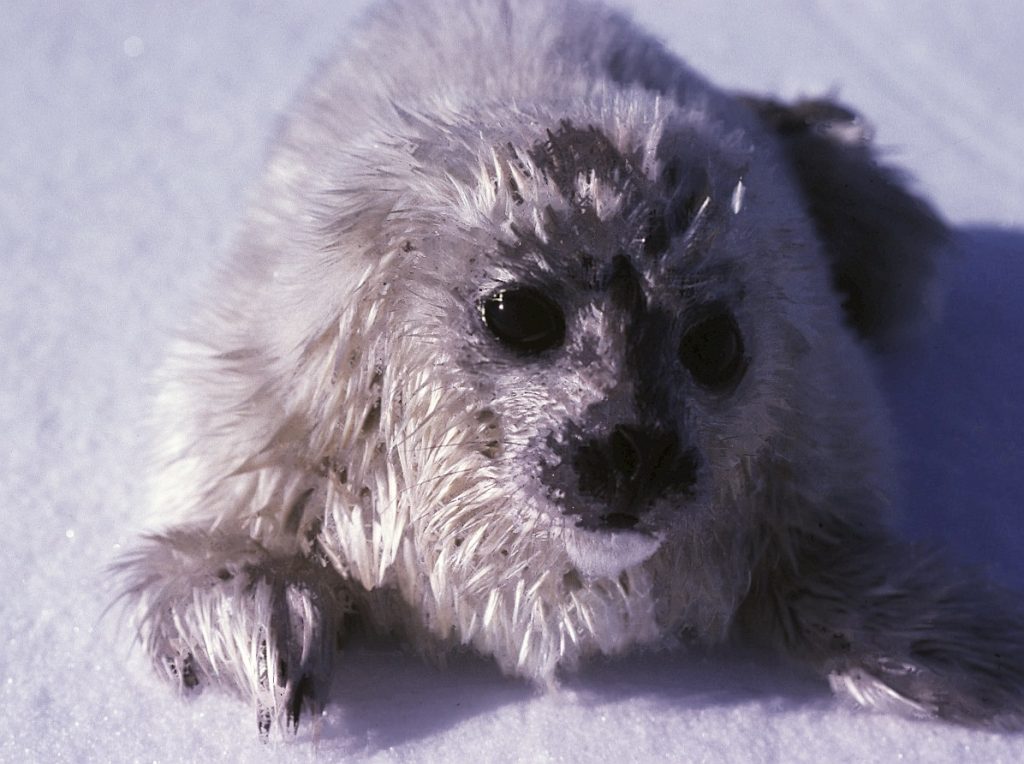 While ringed seals (Phoca hispida) rely on stable sea ice in order to birth pups and raise them, they also rely on sufficiently deep snow drifts in which to dig lairs, which are much like snow caves and can mean the difference between life and death. The lairs provide insulation from extreme cold and offer some protection from predators, keeping their young ones out of view from wandering polar bears – their main predator – until they are weaned. Killer whales, walruses, wolves, dogs, wolverines, sharks, and even gulls prey on pups. Along with providing shelter, there are breathing holes within the lair that allow direct access to the waters below for the seals to hunt polar and Arctic cod and a variety of planktonic crustaceans necessary for survival. During years with poor snow cover, pups can be born on the surface of the ice, but mortality of these pups that weigh only ten pounds at birth is extremely high.

Scientists have already observed and predicted that high pup mortality rates are linked to poor environmental conditions like early ice breakup and low snow. Researchers have now gone a step further by coupling these hypotheses with forecasts of future spring snow and ice conditions, developing a mathematical model, and following it to some stark conclusions for populations off the Amundsen Gulf and Prince Albert Sound in Canada.

The paper appears today in the Ecological Society of America’s journal Ecological Applications. 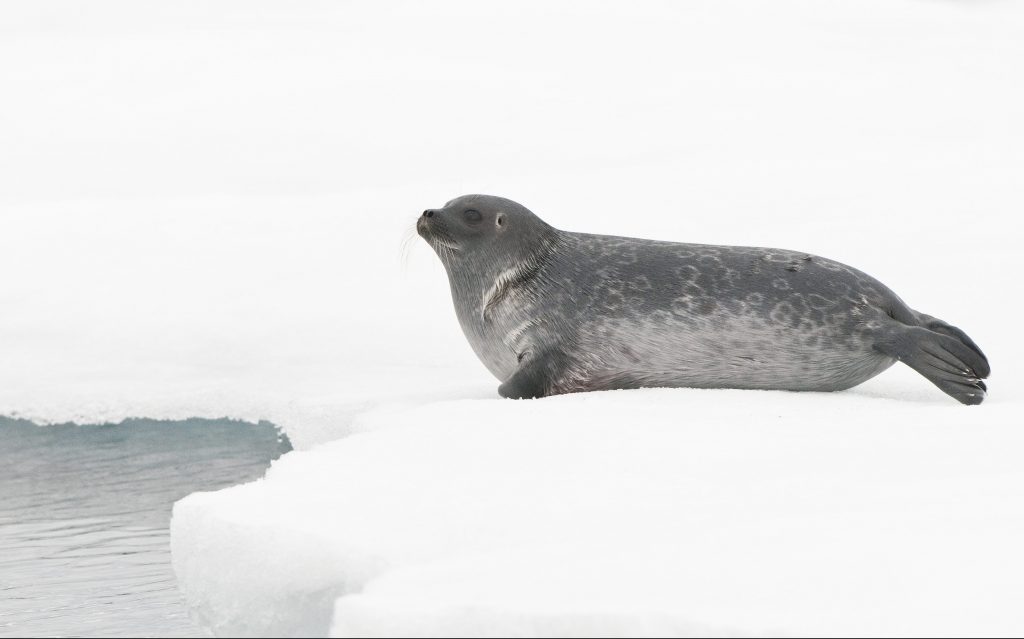 A ringed seal lies on the ice, ready to make a quick escape into the water. Note the ringed pattern on it’s coat, from which the species’ name is derived. Photo courtesy of Rinie Van Meurs.

“It was surprising to see just how little snow is forecast to be available for the construction of lairs in the future,” said lead author Jody Reimer, PhD candidate at the University of Alberta. She was surprised both by the magnitude of the projected population declines – ranging from 50 to 99 percent by the year 2100 – as well as by the fact that these declines appear to be largely driven by insufficient snow on the ice, rather than early ice breakup.

In addition to overall seal population declines, the model projects that there will be a smaller proportion of juveniles relative to adults and pups over time, as fewer pups make it to their teenage years. In general, each successive generation gets a little bit smaller, and the effects of this are seen most acutely in the juvenile stages, especially for a long-lived ringed seals with lifespans up to 43 years.

Reimer also says these results and predictions would not have been made without the new mathematical model, which revealed glaring issues with previous observations, namely adult annual survival.

“When we put the previously published demographic estimates into our model, it predicted dramatic population declines that are inconsistent with the fact that ringed seals still exist in that area,” Reimer said. Ringed seals are considered a somewhat cryptic species, being notoriously difficult to study. Estimates of survival and reproductive rates have been collected over the years, but these estimates had not been combined into a population-level model until now. 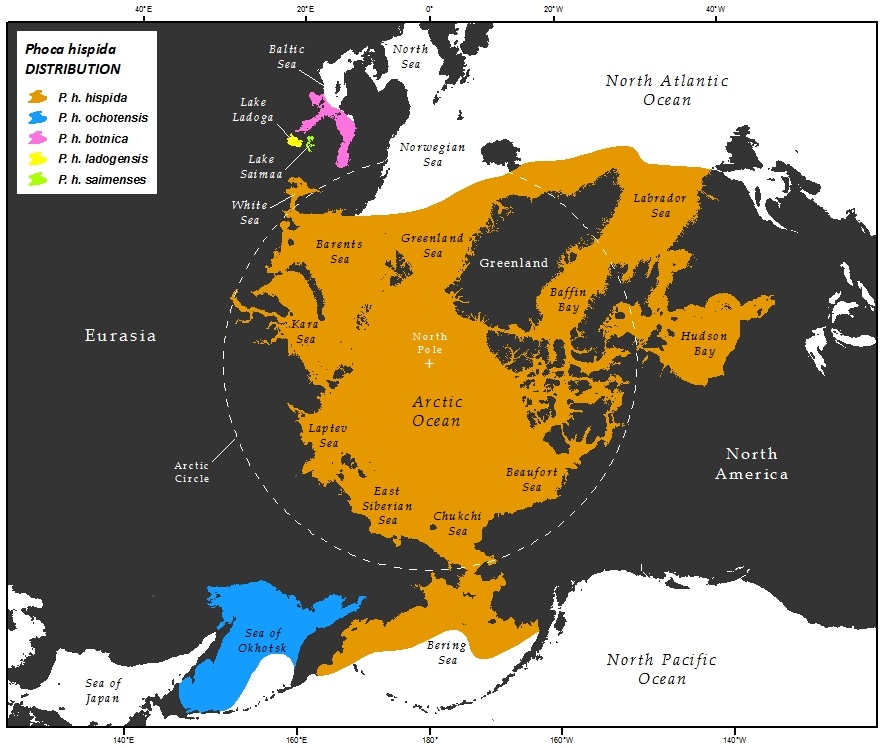 change. They are the most abundant Arctic seal, with a huge geographic distribution, and are thus exposed to a wide range of climate change impacts. Additionally, changes in the community composition of Arctic marine systems can be seen through their diet as they shift their prey in response to what is available.

So, as an indicator species, ringed seals provide information on the health of Arctic marine ecosystems. But this information relies on the ability to detect the large scale changes resulting from climatic changes. Furthermore, future ecological challenges must be anticipated. For ringed seals in particular, given their sensitivity to snow cover, a better understanding – and modelling – of factors affecting adult survival is essential for assessing population viability as the Arctic climate changes.

It appears that Reimer and her colleagues are well on their way to anticipating these changes – “I think this is an example of an instance in which modelling can really help with the interpretation of field data and help inform future field endeavors.” 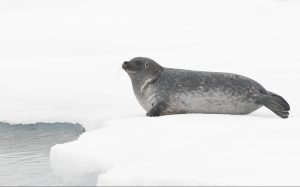