With fire, warming and drought, Yellowstone forests could be grassland by mid-century 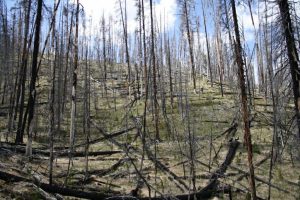 The fires in Yellowstone National Park began to burn in June 1988. A natural feature of the landscape, park managers expected the fires to fizzle out by July, when rains historically drenched the forests and valleys of the world’s first national park.

But the rains never came. Unusually hot, dry and windy that year, more fires erupted and blazed in and around the park until September. By then, 36 percent of Yellowstone was affected. Firefighting efforts topped $120 million.

Yellowstone experiences large fires every 100 to 300 years and its flora and fauna are adapted. Lodgepole pines like those at higher elevations in the park have pine cones that open in fire, releasing seeds to replenish a post-burn forest. But it takes time for trees to mature and the forests to recover — time that a changing climate has been depriving the forest of the last three decades.

A new study published today [Jan. 17, 2019] in Ecological Monographs, led by Winslow Hansen and his former graduate advisor, University of Wisconsin–Madison Professor of Integrative Biology Monica Turner, shows that some of Yellowstone’s forests may now be at a tipping point. They could be replaced by grassland by the middle of this century.