Ocean giant gets a health check 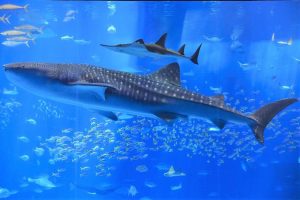 Whale sharks, the world’s largest fish, likely endure periods of starvation and may eat more plants than previously thought, according to the first results of a new health check developed at the University of Tokyo. Ocean scientists now have a powerful, simple tool to discover the diets, migrations, and conservation needs of this endangered species.

Whale sharks are filter-feeding, soft-bodied fish that travel tropical oceans in search of their microscopic food. They grow 12 meters (39 feet) long and weigh 21 metric tons (46,297 pounds), about as long as a public city bus and as heavy as three African elephants. Despite their conspicuous size, many details of whale sharks’ lives in the open ocean remain a mystery, even 183 years after they were first discovered.