Timber rattlesnakes, according to the study’s author, are among the most docile creatures in Appalachia. Photo courtesy of Thomas Maigret.

On the Cumberland Plateau in eastern Kentucky, surface coal mining is destroying ridgelines and mountaintops, and along with them, the habitat of a surprisingly gentle reptile species – the timber rattlesnake.

“Timber rattlesnakes may be the most docile, calm animals of their size in eastern US forests,” Thomas Maigret, a researcher from the University of Kentucky, said. “On several occasions, I’ve witnessed spiders using a rattlesnake as an anchor for a web. Females, especially, move very infrequently, and pose almost no threat to a careful human.”

Unfortunately for the timber rattlesnake (Crotalus horridus) and other species in this region – both plant and animal – surface coal mining requires complete removal of mature forest cover and the upper soil layers. This means that soil is scraped away, rocks disturbed and dug out, plants and trees removed, or the ridgetop landscape flattened and made more uniform to reach the coal buried in the earth. This alteration eliminates many diverse, unique places for animals to live and hibernate. The central Appalachia region spans eastern Kentucky, northeastern Tennessee, southwest Virginia, and southern West Virginia and is one of the most diverse non-tropical ecosystems in the world with thousands of plant and animal species, many that are only found there.

Maigret and his colleagues tracked timber rattlesnakes in a study published today in the Ecological Society of America’s journal Frontiers in Ecology and the Environment. The researchers implanted radio transmitters in snakes of the Cumberland Plateau and tracked their movements until they retreated to hibernation sites in the fall. The data gathered provided a roadmap for identifying other potential hibernating sites, or “hibernacula,” across the study area.

“Snakes of the eastern U.S. vary in their hibernacula selection behavior, and for many species not much is known about hibernacula preferences,” Maigret explained. “For example, many aquatic snakes prefer damp hibernacula near the streams where they reside during the summer. But for other species, any warm, protected crevice they can fit into seems to suffice.”

By analyzing remote-sensing and satellite imagery, mining maps, and permit data from the USGS and other sources, the researchers were then able to determine how mining might affect a wide range of hibernation sites. 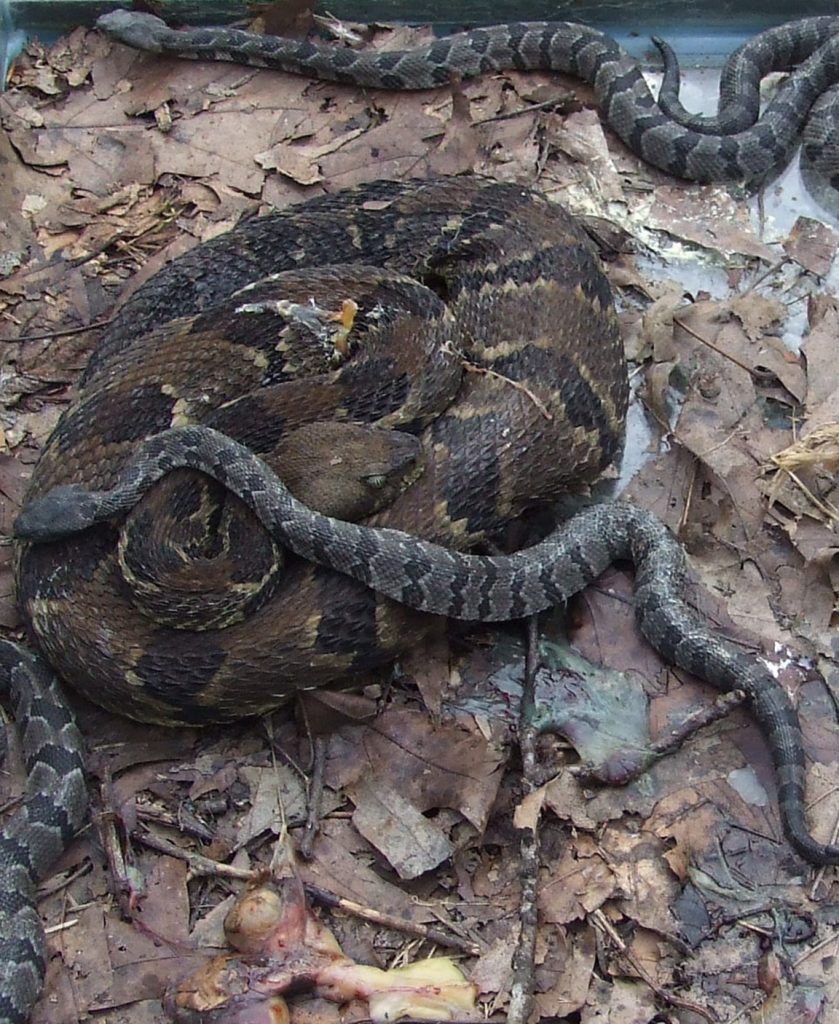 Timber rattlesnakes choose places to hibernate that are more likely to be surface mined due to their ridgetop locations. Mining thus puts this species at a disadvantage and reduces the biodiversity of the area. Photo courtesy of Thomas Maigret.

They found that because timber rattlesnakes tend to hibernate in the same places that make ideal mines, surface mining disproportionately alters or eliminates their preferred habitat. “Other species with habitat preferences similar to timber rattlesnakes – including some snakes – may also be affected disproportionately by mining. On the other hand,” Maigret said, “species associated with middle or lower slopes will not be affected by mining to the same extent.”

In other words, the mining operations here are selecting against timber rattlesnake habitat, effectively cutting into the region’s biodiversity.

The Surface Mining Control and Reclamation Act of 1977 does not require mining companies to reforest the area to the original mountaintop landscape after mining has wrapped up. The law does dictate that the “approximate original contours” of a site be re-established, in an attempt to not leave the area uninhabitable by the species that once lived there. However, it is rare for forests and biodiversity to fully recover from mining-related disturbances, to the detriment of many animals and their habitats.

Is the damage done to mountain-tops irreversible? While researchers are actively improving the ability to restore habitats on reclaimed mine lands, surface mining acts as an eraser of unique ecosystems, creating a uniform landscape where there once were diverse habitat options. In the Cumberland Plateau, mining leaves conservation and management efforts very little to work with even after an operation restores the approximate original mountaintop landscape.

Still, Maigret is optimistic about the future of restoring mined areas for the docile rattlesnakes. “Coal mining in central Appalachia has serious economic headwinds,” he stated, “and may never return to the rates of surface mining of the late 20th century. Timber rattlesnakes are resilient, and their ability to adapt to previous landscape changes – including massive deforestation in the 19th and early 20th century – should not be underestimated.”