Get a sneak peek into these new scientific papers, publishing on January 3, 2019 in the Ecological Society of America’s journal Frontiers in Ecology and the Environment.

Flashing lights can scare off some predators from llamas and alpacas 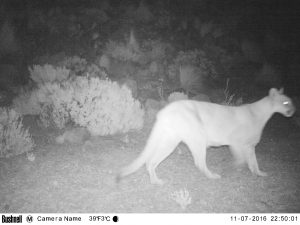 A puma is caught on camera at night during a study to see if flashing lights are a viable non-lethal predator deterrent for protecting llama and alpaca herds. Photo courtesy of Omar Ohrens.

Historically, lethal methods for protecting livestock from predators have contributed to the decline of terrestrial carnivore populations in many ecological communities. While non-lethal alternatives abound (and many local indigenous farmers prefer them), most of these methods have not been rigorously tested to determine whether they are effective. A team of researchers from the University of Wisconsin and from Chile’s Pontifícia Universidad Católica deployed an array of flashing light deterrents across their study area on the Altiplano, or Andean Plateau, which stretches across a portion of Chile and Bolivia, where pumas and Andean foxes prey on llama and alpaca herds. The researchers found that the light devices effectively deterred predation on their herds by pumas, but not by Andean foxes. This study represents a step forward in establishing experimental protocols for assessing the effectiveness of strategies and products that help humans and wildlife coexist.

Coal miners and rattlesnakes prefer the same type of topography 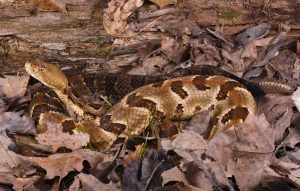 On the Cumberland Plateau in eastern Kentucky, surface coal mining remains a common method of coal extraction and requires complete removal of mature forest cover and the upper soil layers. Even though federal law requires mining companies to approximately reconstruct the original topography after mining has wrapped up, it is rare for natural succession, native forest growth, and terrestrial biodiversity to return to their original levels. To determine how surface mining affects ridgetop habitat availability, researchers from the University of Kentucky implanted radio transmitters in timber rattlesnakes (Crotalus horridus) and tracked their movements until the snakes retreated to hibernation sites in autumn, which provided a roadmap for identifying other potentially viable hibernating sites, or “hibernacula,” across the study area. By analyzing a suite of LiDAR remote-sensing and satellite imagery, mining maps, and permit data from the USGS and other sources, the researchers were then able to determine how mining might affect the range of rattlesnake hibernacula. They found that because timber rattlesnakes tend to overwinter in the same places that make ideal mines (along ridgelines and other similar higher-elevation topographic features), surface mining disproportionately alters or eliminates the preferred habitat of this species. These ridgetops contain other plant and animal species that may be similarly affected. The authors’ analyses also show that restoring mined areas in Appalachia will be difficult, especially where ridgetop topography has been permanently rearranged. 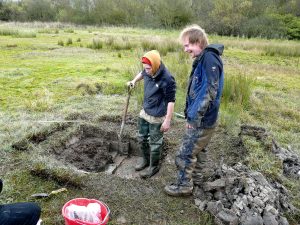 UK researchers exhume a pond to study how much carbon aquatic features like these can take in, and how quickly. Photo courtesy of Michael Jeffries.

Forests, grasslands, wetlands, and other vegetated habitat types take in large amounts of carbon that is then stored in plant tissue and sediment – carbon that would otherwise exist in the atmosphere as a greenhouse gas. But there is little consensus about how much carbon can be stored in lakes and ponds (and how quickly it can be stored, and for how long). Researchers from the University of Northumbria and from the University of Highlands and Islands dug out thirty small ponds in a former coal mine in the UK and measured how much organic carbon the ponds accumulated over an 18- to 20-year period. They found that over 20 years, the ponds acted as carbon “sinks” and had higher rates of organic carbon burial than many other terrestrial and aquatic habitats, including boreal and temperate forests and temperate grasslands.

The discipline of ecology is changing quickly to accommodate shifting societal needs and to make room for new areas of interest, but the vast breadth of research being published makes it difficult to quantify exactly how – and how much – it is really changing. Today, software can learn from data, identify patterns, and make decisions with minimal human intervention – a concept dubbed “machine-learning.” Automated content analysis, or ACA, is a machine-learning method that “trains” a program or model to identify key concepts and themes across large amounts of text. Researchers from Purdue University in Indiana asked their ACA software to “read” over 80,000 papers published in the ecological literature between 1980 and 2016 and to identify the key concepts and themes in each. The researchers then analyzed how the prevalence of various themes has changed over time, and found that theoretical research and articles on plant and population ecology are becoming less common, while articles about microbial ecology, genetics, biogeochemistry, macrosystems ecology, and human dimensions of nature are becoming more common.