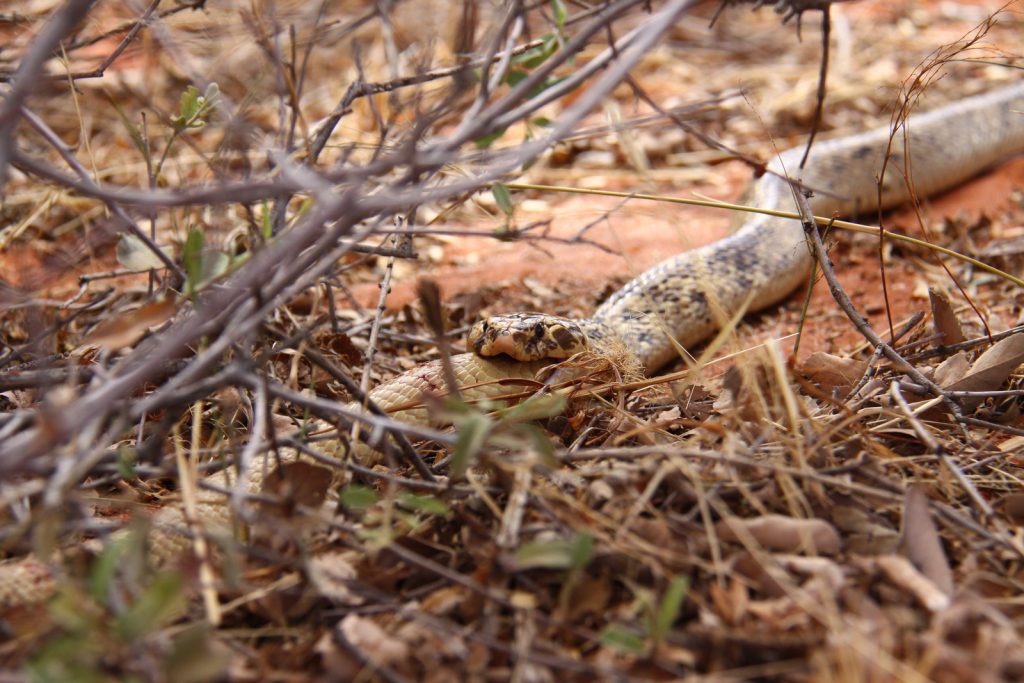 A cape cobra male consumes a smaller male of the same species in southern Africa, a display of cannibalism thought to be rare among the species. Photo courtesy of Bryan Maritz.

Last spring, researchers in South Africa’s Kalahari Desert found a large male cape cobra devouring another smaller male of the same species. Surprised by the thought-to-be-rare event, they decided to investigate how common and widespread cannibalism was in cobras.

Apart from a few species, scientific understanding of snake diets is lacking. Snakes are elusive creatures that feed relatively infrequently, making feeding observations difficult to come by. Bryan Maritz, a researcher at the University of the Western Cape and lead author of the new study in the Ecological Society of America’s journal Ecology, explains, “This work highlights a renewed effort to meaningfully quantify several aspects of snake natural history, especially in poorly studied regions such as Africa.”

While cape cobras are known to eat other snake species – up to a third of their diet – recorded instances of cape cobras eating individuals of the same species, known as conspecifics, has been extremely rare. Scientists have treated such reported observations as aberrant behavior.

So, what caused this cape cobra to attack and eat the smaller male of its kind? How often does this happen? Do all cobras take part in cannibalism?

Maritz and fellow researchers in the southern African region were studying resource competition between two African snake species when they saw the rare cobra cannibalistic display that inspired them to conduct the new study. Snakes provide a unique opportunity to examine both cannibalism and when animals hunt and eat snakes (ophiophagy) because of their shape – prey fits easily into the predator’s mouth and body for consumption and digestion.

“Cobras” consist of about 30 species, six of which were included in the study. Results suggest that not only do wild cobras frequently eat other snakes – snakes accounted for 13–43 percent of all species they consumed– but also that cannibalism may be somewhat common as well, given that five of the six species displayed the behavior.

Interestingly, cape cobras ate conspecifics in surprising abundance – the only species they consumed more frequently was puff adders. Additionally, the researchers only found males engaged in cannibalism events, as prey or predator, hinting that this might impact intrasexual competition. This raises the question of whether cannibalism evolved from a male-male combative behavior, considering that male-male combat in cobras typically includes biting.

Understanding how snakes interact with not only other species, but also with individuals of their own, can provide a basis for learning about more complex behavior in different scenarios. If their ecosystem warms drastically and food becomes scarcer, will snakes engage more often in cannibalism? If cannibalism drives snakes to select for larger sizes, what effect will that have on the other kinds of prey they eat? Maritz hopes that “improved understanding of snake ecology and feeding in general will help to highlight the ecological functional roles that snakes are performing in African ecosystems.”

Bryan Maritz, Department of Biodiversity and Conservation Biology, University of the Western Cape

Robin A. Maritz, Department of Biodiversity and Conservation Biology, University of the Western Cape

We can connect you to ecological scientists who are available for interviews and for providing on-call expertise to members of the media. Learn more»
This website uses cookies to improve your experience. We'll assume you're ok with this, but you can opt-out if you wish.Accept Read More
Privacy & Cookies Policy