FOR IMMEDIATE RELEASE: Wednesday May 30 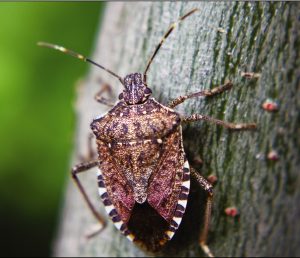 Biologists can use environmental DNA (“eDNA”) found in water samples – from the feces, shed skin, and carcasses of fish, insects, and other aquatic animals  – to detect the presence of species. Until recently, however, this method has mostly been limited to aquatic ecosystems. Now, a group of Rutgers University researchers has developed a way to obtain and analyze eDNA on land. The new method detects the bugs more effectively than other tests such as blacklights or pheromone traps. Since it enables early detection of pests – one of the main keys to eradication – this approach could revolutionize agricultural pest surveillance.

Eco-culture of Great Barrier Reef and other iconic ecosystems

The Great Barrier Reef has great cultural value to local residents as well as domestic and international tourists. In 2013 it was estimated that the GBR received 53.3 million use‐days, with 98% of all use‐days consisting of tourist visitation. Photo courtesy of ©M Curnock.

Coral reef researchers carried out a survey that establishes the cultural importance of Australia’s Great Barrier Reef, and show how the less tangible values of ecosystems can be incorporated into environmental decision making. One of the challenges for conservation is that the “value” of an area being managed (or affected by human disturbance) encompasses much more than just the ecosystem’s contribution to the economy. Stakeholders also value the traditions, customs, emotional well-being, and sense of identity that ecosystems like the Great Barrier Reef can provide. The researchers surveyed tourists, local and indigenous residents, commercial fishers, and other stakeholder groups in Australia to determine the importance of several cultural values provided by the GBR. The authors discuss how such surveys can give environmental managers and policy makers a way to more clearly realize the non-monetary 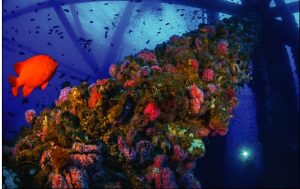 Example of marine infrastructure: fish associated with oil rigs that can serve as artificial reefs. Photo courtesy of ©rig2reefexploration.org.

Underwater structures like marinas, breakwaters, pilings, oil rigs, and offshore wind farms may not be conducive to colonization by fish populations. The prevalence of these structures along coasts undergoing development threaten marine habitats. A group of Australian researchers has devised a way to help managers use principles of ecological engineering to design marine infrastructure that benefits both humans and nature. The authors consider how the physical characteristics like hole size and roughness of both natural and artificial reefs can be incorporated into customized human structures to provide habitat for fishes. For example, the foundations of offshore wind turbines could be specially designed to include holes or structural features that benefit fish abundance in the long term.

Who are the winners and losers and in an oil sands landscape? 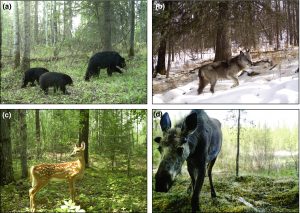 Exploitation of the oil sands in western Canada is transforming the boreal forest landscape in unprecedented ways. Media coverage has often focused on the detrimental effects of open-pit mines, but in-situ drilling and its associated landscape disturbances, which span most of northern Alberta and parts of British Columbia and Saskatchewan, have received less attention. A new study by two Canadian researchers shows how this type of drilling influences populations of gray wolf, white-tailed deer, moose, American black bear, coyote, Canada lynx, fisher, red fox, snowshoe hare, and American red squirrel across the region. A combination of camera-trapping and landscape analysis revealed far-reaching effects on wildlife abundance and distribution. A criss-crossing grid of paths cleared for drilling exploration has opened up new thoroughfares for predators, forests cut down for development have been replaced with new vegetation, and the balance between predators and prey is shifting in the new industrial landscape.