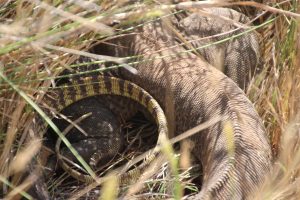 A large male yellow-spotted monitor (Varanus panoptes), also known as a goanna, curls his tail in the grass. Photo courtesy of Georgia Ward-Fear.

Boldness correlates with the mating success, but not body size or sex, of yellow-spotted monitor lizards roaming the remote Oombulgurri floodplains of tropical Western Australia, ecologists report in the Ecological Society of America’s open access journal Ecosphere. But boldness has a cost: bold individuals expose themselves to much higher risk of being eaten by predators during the dangerous wet season. The researchers demonstrated quantifiable behavioral syndromes in the large lizards, with an intriguing relationship to the lizards’ seasonal hunting strategies.

“Personality is kind of interchangeable with the term behavioral syndrome. Some scientists have a weird thing about saying “personality”; they don’t like to think animals have personalities. But they definitely do,” said lead author Georgia Ward-Fear, a researcher at the University of Sydney. Boldness, she and her coauthors found, was not conveyed by imposing stature. “There are bold females as well as bold males, and shy females as well as shy males. Some of the biggest individuals we observed were really shy.”

The yellow-spotted monitors (Varanus panoptes), affectionately known as goannas, are related to Komodo dragons and share many of their larger cousins’ behaviors. Adults can be 1.6 meters long, and some males grow larger. The lizards hunt insects, frogs, and small mammals, and scavenge whatever they can get. 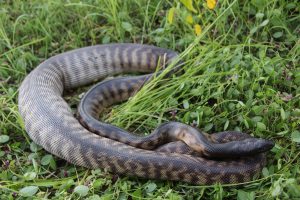 A Black-headed python (Aspidites melanocephalus) with a goanna in its belly. Photo courtesy of Georgia Ward-Fear.

“This boldness syndrome was not only quantifiable, it correlated with a heap of ecological traits that we were monitoring. We we were only able to figure that out because we were radiotracking individuals to assess their home ranges and the characteristics of the habitats that they were choosing to stay in during the two distinct seasons,” Ward-Fear said. “It was based on intuition really, to start with, but we couldn’t have imagined how many correlations we would pull out based on the behavioral differences within individuals.”

Traditionally, behavioral research is conducted in the lab. Standardized measures that can be repeated easily and reliably are difficult to achieve under field conditions. Ward-Fear’s unusual field study of of goanna behavioral syndromes emerged spontaneously out of long term ecological study aimed at goanna conservervation.

Ward-Fear and her colleagues grew curious about goanna personality during field experiments designed to teach predatory lizards that poisonous, invasive cane toads (Rhinella marina) make a poor meal. The large Central and South American toads, introduced to Australia during the 1930s to control agricultural pests, have spread extremely successfully through Oceania, creating havoc in the ecosystems they infiltrate by poisoning native predators that try to eat them.

“Cane toads have caused huge impacts in all the environments that they have invaded. They are still invading across northern Australia,” Ward-Fear said. Researchers are hoping to get ahead of the invasion front, teaching native lizards to avoid the poisonous toads.

With the goal of providing a non-lethal life lesson, the researchers fed the goannas canes toads that were small enough to make them sick without killing them. True toads, like the cane toad, possess potent cardiotoxins. Because Australian has no native toads, Australian reptiles like the yellow spotted monitors have not evolved defenses against the bufotoxins in the toads’ skin and glands.

“Boldness is a really interesting part of the story, because conditioned taste aversion is a behavioral mechanism. We found that shyness is quite correlated with neophobia, fear of new things. You can imagine very shy individuals are probably less likely to eat novel prey that they meet in the field, so they may have more of a resilience to the cane toads naturally. So it was really cool to document this behavior in the context of the cane toad study,” said Ward-Fear. 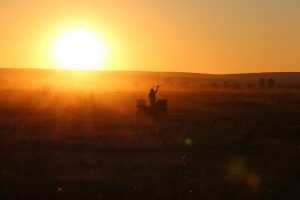 Researcher and author Georgia Ward-Fear, back-lit by sunset, radiotracks individuals to assess their home ranges and the characteristics of their chosen habitats. Photo courtesy of Miles Bruny.

During the cane toad study, the team made 12 visits to Oombulgurri (15°08’34.0″S 127°52’36.0″E) over 3 years. They measured the body length, weight, and health of the goannas, took genetic samples, and fitted the goannas with radio transmitters. While tracking the animals through their complex lives, the team got to know them as individuals, with what seemed like distinct personalities, Ward Fear said. Consistently brave or shy behavior in approaching strange ecologists, unusual foods, and risky environments, did not seem to be associated with body size or sex. The ecologists were curious.

“Anyone who works with these animals knows that they are amazing. The are renowned for their intelligence, but there has been no formal study of their cognition. They do come across as intelligent lizards. They are quite sneaky, and inquisitive. They are a bit more like a mammal in that sense. They’re fun to work with,” Ward-Fear said.

To assess boldness, Ward-Fear and her colleagues designed stardard response scales for three behaviors. They assessed the goannas’ skittishness in response to the standardized approach of an ecologist.

“They’ll try to take you on if they feel too threatened, or if they’re angry, or during the mating season. They stand up on their hind legs and they inflate their throats,” Ward-Fear said, but the goannas are also curious. “They watch you from a long distance away, and they can let you get quite close to them.”

A second scale quantified response to handling. Some individuals freeze, while other struggle mightily, whipping their tails, hissing, and inflating their throats in warning. A third scale indicated how the goannas reacted to cane toads, a frog-like potential prey that they had never seen before. Some goannas will go for the strange food immediately, others investigated warily, or would not try cane toads at all. The researchers combined the scores into a single measure of boldness.

Bolder individuals had larger home ranges and higher mating success, but a higher rate of death. Ward-Fear says the patterns of habitat use by bolder goanna suprized her the most.

“The coolest thing was the space use, habitat use that we saw,” she said.

When annual monsoons flood the Oombulgurri, the plains burst to life along the rivers. The verdant river edges are prized goanna hunting areas, rich in food, but the thick plant life also hides dangerous predators. During the wet season, large pythons descend from the steep, rocky escarpment at the edge of the plain to patrol the river edges. The pythons, like dingos, raptors, and humans, are big enough to make a meal of yellow-spotted monitors. The food-rich wet season is also the season of highest risk for goannas.

Shy goannas abandon the high-risk riparian zone during the wet season, Ward-Fear discovered. Bold individuals stay close, managing risk by avoiding dense vegetation where snakes lurk. As a consequence, many bold goannas are eaten during the wet season. Shyer lizards stick to sparser plant cover at all times of year. During the dry season, when need for water draws shy goannas back to the rivers, shy individuals experience their highest rate of predation. The different personality types appear to persue complementary life strategies.

Ward-Fear does not yet know if the behavioral syndromes are inherited. She plans to investigate goanna aggression and adventurousness in future field work at Oombulgurri.