Dark nights offer best chance of survival for sixbar wrasse leaving the open ocean for the reef, but risky moonlit swims may grant a fitness edge to survivors 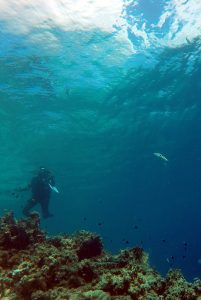 Parents’ choices about when to breed have lifelong consequences for offspring. For the sixbar wrasse, the flexibility of babies to delay their critical swim towards adulthood frees adults to spawn more often, say ecologists in a new research report in the Ecological Society of America’s journal Ecology.

A delay of a few days sets up differences in experience that could have far reaching consequences for fishes’ lifetime success. In a species that can choose its sex, consequences could include which fish grows large enough to compete as a male and produce the most offspring.

Sixbar wrasse hatch at sea and spend about seven weeks in open water before they must make a dangerous dash for their adult home on a coral reef. The first to arrive can avoid the crowds and are more likely to survive.

“Presumably, the early arrivers can get the lay of the land and select the best hiding spots,” said first author Jeff Shima, a professor at the Victoria University of Wellington in New Zealand.

Moonlit nights, full of watchful predators, are not safe for small reef fish. Baby sixbars that arrived on the reef during the full moon or as it waxed past the first quarter were more likely to disappear. Fish that settled in the last quarter had the best chance of survival, Shima and his coathors found.

“Baby fish making their way back to the reef must traverse a dangerous wall of mouths. Most will attempt this journey at night, during the new moon, under the cover of darkness,” Shima said.

Babies that arrived on the reef during the moon’s last quarter, the researchers discovered, were 10 percent larger than other new arrivals. The researchers concluded that that these fish were larger because they were older. These babies may have delayed departure for up to 8 days to avoid travel on bright full moon nights. 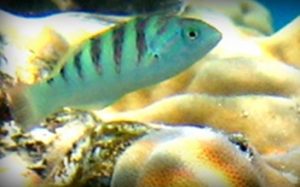 The sixbar wrasse (Thalassoma hardwicke) is a common inhabitant of coral reefs in the Indo-Pacific region, particularly the shallow lagoons of Moorea Island in French Polynesia (17°30′ S, 149°50′ W), 17 kilometers (11 miles) northwest of Tahiti. A 60-kilometer barrier reef encloses a beautiful, bright blue lagoon around the steep, green slopes of the old volcano. Sixbars settle in the lagoon on small reef patches, surrounded by sand, rock, or cobble, that have grown from the lagoon bottom.

“We are interested how the timing of spawning and the developmental decisions of offspring sets some individuals on a pathway to greater reproductive success. Are the most successful fish born at just the right time or did they make decisions that made them a winner?” Shima said.

To give both their eggs and themselves the best chance of avoiding predators that hunt by sight, sixbars meet to mate at the edge of the reef, on outgoing tides. They court on reef promontories where their fertilized eggs will be swiftly swept out to sea. Sixbars might be expected to avoid courting at times of the month that place their babies on a schedule to settle back to the reef during a full moon, but that does not appear to be their strategy. Nor do they always time their courtships to bring their babies back to the reef when the moon is dark. In the twenty-odd years Shima has studied sixbar wrasse and coral reef ecosystems, he has seen fish spawning across all periods of the lunar cycle. Baby fish, however, seemed to return to take up residence on the reef in higher numbers at the new moon, when the night is darkest.

“If there really is a good time for babies to come back onto the reef, why are adults spawning all the time?” To investigate this question, Shima and his colleagues dug into old data collected in 2004 and 2005. The researchers had measured the size of young sixbars, which could give a good approximation of the fishes’ ages, because juveniles grow at a steady rate. 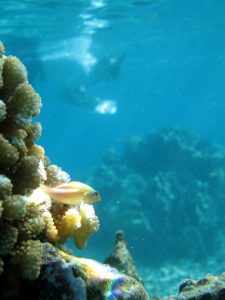 A hawkfish waits to ambush unwary little fish as author Craig Osenberg surveys young sixbars on a reef in the background. Hawkfish are an important predator of sixbar wrasse. Credit, Jeffrey Shima.

The data tracked the fates of 1038 sixbar wrasse dwelling in 192 small patches of reef. For six lunar cycles in January through July of 2004 and five lunars cycles from February to June of 2005, researchers returned every few days to observe the number and size of juvenile sixbars in residence. They could identify new arrivals as the smallest fish on the reef (9-13 millimeters), with colorless bodies, and a characteristic tendency to hunker down under coral or seaweed during their first days on the reef.

Baby sixbars spend an average 47 days at sea before surfing over Moorea’s barrier reef and dashing 100 to 1000 meters through the lagoon to find a safe coral nook. More than half arrived during the new moon. A quarter made the trip during the moon’s first quarter. But arrivals during the last quarter and full moon were much lower than would be expected by chance, averaging less than a sixth and eighth of arrivals during the lunar cycle.

The simplest explanation was that few migrating baby sixbars evaded predators on moonlit nights. But the larger size of babies arriving to settle on the reef during the moon’s last quarter suggested unlucky babies that turned 47-days-old at the full moon could choose to wait until a waning moon, or opportune cloudy night, gave them a better chance of reaching the reef uneaten.

Shima and his team are now working on refining the age estimates for young sixbar reef settlers by examining tiny structures in the inner ear called otoliths. Built, like shells, from calcium carbonate, otoliths grow a visible ring of new material every day, serving as tiny chronometers in the heads of every fish.

There might be advantages to spawning under an inauspicious moon. Fewer babies may survive a journey over the barrier reef during the full moon, but those that do face less competition from rivals of the same age. This could give them a fitness edge.

“It’s possible that some parents are positioning their offspring to settle early, and beat the rush,” Shima said. He and his students have some preliminary results suggesting that larger females spawn at different times of the lunar month.

Switching sex seems fairly easy for wrasses, which have relatively simple internal plumbing, Shima says. As baby fishes grow, most will become female because they can be assured of mating opportunities with males who are always ready and willing. If a good opportunity presents itself, the largest females can switch to male. For males, mating is highly competitive. Male wrasses are territorial, protecting either a harem of females or a prime mating promontory, depending on the species. Successful males get to breed many more times per day, with many different females—giving a greatly increased reproductive success.

Unlike salmon, which die after they spawn, wrasse breed many times during their lifetimes, giving them opportunity to employ a portfolio of reproductive strategies. By spreading the birth of their offspring throughout the lunar cycle, parents could be hedging their reproductive bets, putting some money on safety and some on high stakes winners.

Shima says his results may not surprise other ecologists working on coral reefs. He and his coauthors have quantified behaviors that other scientists have observed in reef fishes for years. But he thinks the implications of these differing developmental histories may be underestimated.

“It suggests that there is a lot of variation in the players, the individual fish that arrive at the reef and interact and compete and try to avoid being eaten. Each individual carries the ‘baggage’ of its own birthdate and developmental history. Some of these factors could explain the demographic variation among individuals and the social dominance hierarchies that play out in these systems.”

Shima is a parent of four children himself, and says he can’t resist drawing analogies to parenting strategies.

“I think parents naturally worry about many decisions they make, and how these may be detrimental to their own children.  It is reassuring to know that offspring are resilient, and have real capacity to improve their lot in life.”