Is biodiversity bad for your health?

The specter of a dangerous new disease emerging from the dark depths of the wilderness, jumping from an animal host to people, is an oft-told horror story, though such “spillover” from wild species is not the most common mechanism through which new diseases emerge. Several recent reviews have expressed concerns that intact ecosystems rich in biodiversity pose a danger to human health by harboring an equal diversity of infectious disease agents.

Animal species do not present an equal threat of disease transmission, however, say Richard Ostfeld and Felicia Keesing, ecologists at the Cary Institute for Ecosystem Studies and Bard College. Some families, such as rodents, transmit disease relatively commonly, while others never do. People most often contract zoonotic disease from rodents encountered near houses or agricultural fields. The authors review the evidence for emerging disease risk in both relatively intact, functional ecosystems and ecosystems strongly affected by human presence.

Though high diversity in vertebrate species is sometimes correlated with a wider total pool of pathogen species, biodiversity is not linked to a larger number of pathogens with the potential to leap between species. Solid evidence does point to a correlation between biodiversity and lower prevalence of known infectious disease in people. The authors argue that there is no reason to expect that biodiversity is a risk factor for disease emergence and offer possible experiments to test their hypothesis empirically.

Understanding the roots of grassland mosaics 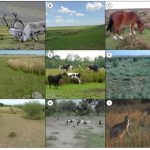 Grazing ecosystems from the arctic tundra to tropical savannas are not smooth expanses but fine-scale patchworks of lawn, favored by big grazing animals, and taller vegetation. Ruth Howison and colleagues at the University of Groningen and the royal Netherlands Institute for Sea Research are interested in the environmental processes underlying the mosaic. They look to the soil in a new report in ESA’s journal Ecological Monographs. Compaction of soil under the hooves of heavy grazers promotes lawn communities. Underground animals churn the soil, engineering conditions that favor taller plant life such as bunch-forming grasses, herbs, and shrubs.

Control of agricultural pests by their natural predators saves an estimated $627 per hectare of cropland annually. Abetting these natural crop protectors is of interest to economists and ecologists. But some pest-eating insects have their own predators, Ingo Grass and colleagues at the University of Göttingen point out in ESA’s journal Ecology. During peak aphid season, European tree sparrows fed their nestlings a diet of 77 percent hoverflies and ladybugs (ladybird beetles). Hoverfly caterpillars are the most abundant aphid predators. When the birds were not around (thanks to protective nets set up by experimenting ecologists), aphid density fell by 24 percent in wheat fields and 26 percent in oat fields. 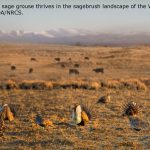 How do grazing livestock affect their greater sage-grouse neighbors in Wyoming’s sagebrush country? Positively or negatively, depending on the amount of grazing and when grazing occurs, according to research published in ESA’s journal Ecological Applications by scientists from the U.S. Geological Survey (USGS), Colorado State University, and Utah State University.

“This study breaks new ground by evaluating multiple, real-world livestock grazing operations across an entire state,” said USGS ecologist and study coauthor David Pyke. “The study not only revealed the complex interactions among plant growth, when and how much livestock graze, and the resulting effect on wildlife, but most importantly, it also provides hope for a way to help sustain ranching while simultaneously sustaining wildlife populations.”

Power and peril of nest boxes

Scientists often use artificial breeding sites such as nest boxes, bat houses, and human-made burrows to study and manage numerous species of animals including bats, insects, lizards, fish, and birds. The addition of human-made nest sites to an ecosystem does not always benefit populations or help researchers to monitor species, such as the American Kestrel, which regularly use nest boxes, ecologists from The Peregrine Fund’s American Kestrel Partnership (AKP) and the Department of Biological Sciences and Raptor Research Center at Boise State University warn in ESA’s journal Ecological Applications. 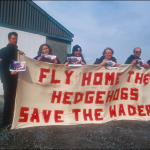 Invasive species management often generates social conflict. Sarah Crowley and colleagues at the University of Exeter consider why some management approaches may be more prone to conflict than others and offer approaches for anticipating disagreements, communicating, and including local communities in ESA’s journal Frontiers in Ecology and the Environment. 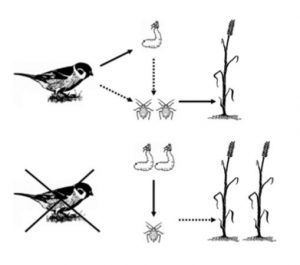