The resurgence of Zika virus has raised anxieties about the spread of infectious disease by mosquitoes as the Ecological Society of America heads to southern Florida for its 101st Annual Meeting. Research on mosquito biology and disease transmission will have a strong showing at the meeting Fort Lauderdale, this 7-12 August 2016. Climate change and species invasions are strong themes among this year’s research presentations on infectious disease.

Geologists have proposed a new epoch, the Anthropocene, to describe our present time, in which the pervasive presence of humans and the products of human invention are shaping the atmosphere, oceans, and ecosystems of the world. The meeting theme “Novel Ecosystems in the Anthropocene” invites a focus on the new relationships between species arising under the influence of global change.

Is mosquito-borne disease risk heating up with a warming climate?

Mosquito life cycles, and those of the pathogens they host, are intimately connected to the temperature and humidity of the cities and landscapes they inhabit. Epidemiologists worry that climate change is fostering emergence and resurgence of vector-borne and zoonotic diseases such as dengue, chikungunya, Zika, and malaria. But warmer is not necessarily always better for the pathogen. Modeling transmission of viruses with attention to the physiological responses to mosquitoes to temperature, Erin Mordecai of Stanford University and colleagues in Florida concluded that warming temperatures may accelerate transmission in North America’s cooler states, but are not likely to intensify the problem in tropical and subtropical regions that already bear the heaviest burden from mosquito-borne illnesses. Her talk is part of a session on Disease Ecology (I), which will also feature hantavirus, snails, and vampire bats.

Organizing defense forces to hit mosquitoes where they breed

Are efforts to control mosquito breeding sites more effective when synchronized across urban areas or staggered? A mathematical model has suggestions for municipalities. Schwab will present in the Disease Ecology (III) session, featuring talks on transmission of infection, from polio to the catastrophic epidemic of the cryptid fungus Bd in amphibians. 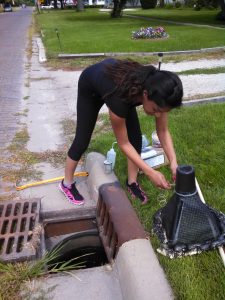 Beyond the blood meal, mosquitoes need sugar and safe and nurturing pools to cradle their eggs and emerging larva. Fallen leaves floating in still water (like residential stormwater drainage ditches) make appealing hatcheries for the common house mosquito (Culex pipiens), a carrier of West Nile virus. Gardner and colleagues found that the leaves of native common blackberry (Rubus allegheniensis) are attractive to gravid female mosquitoes, but inimical to their larvae. Invasive Amur honeysuckle (Lonicera maackii) both attracts females to lay eggs and favors survival to adulthood. The different communities of bacteria that live on the plants appear to play a role in the survival of mosquito larvae. The researchers experimented with honeysuckle leaf “traps” coated in unfriendly bacteria. Disease Ecology (II).

In a triple whammy for disease transmission, zebra finches with high stress hormones (corticosterone) suffered from double the number of mosquito “foragers.” The stressed birds, but not controls, had high enough loads of West Nile Virus circulating in their blood to transmit the virus to mosquitoes. Mosquito females feeding on the stressed finches laid their egg clutches more quickly. Gervasi’s presentation is part of a symposium on “Resource provisioning and wildlife-pathogen interactions in human-altered landscapes.” 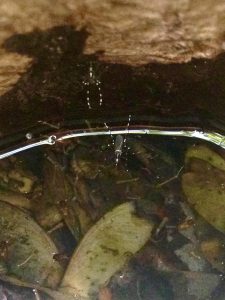 The aggressive day-biting Asian tiger mosquito, Aedes albopictus, has spread with global trade from its native home in the tropics and subtropics of Southeast Asia. First observed in Houston, Texas, in 1987, it rapidly spread through the interstate system in the the United States. Its range is pushing northward into New York and Pennsylvania. Does Ae. albopictus crowd out other mosquito species? Katz surveyed the mosquito species present at sites in southern New York State.

As an example of the costs of mosquito suppression, three imperiled native plants in the Lower Florida Keys suffer indirectly from the spraying of insecticides in housing developments flanking National Key Deer Refuge. Harris will present her work in a poster session on Conservation.

Temperature is an important factor in the success of both mosquitoes and the pathogens they harbor. Competition with other mosquito species complicates this relationship. To better model how climate change may affect mosquitoes and the transmission of disease, Bowden and John Drake of the University of Georgia investigated how competition affected optimal temperatures for larval growth.

An invasive mosquito helps break the spread of a parasite

Some species of mosquitoes spread dangerous human diseases. But mosquitoes have their own parasites, like the protozoan Ascogregarina barretti, which is related to the organisms that cause malaria and toxoplasmosis, and infects the native North American mosquito Aedes triseriatus. The invasive mosquito, Aedes japonicus, a recent arrival in North America, does not contract As. barretti. Will the presence of Ae. japonicus dilute the prevalence of the parasite in the native mosquito?

Mosquitoes have complex life cycles and live in very different environments as immature larvae than as the flying biting pests people know and love. Models that seek to optimize mosquito management must take this variable life history into account. Alcalay will present in a session on Population Dynamics and Regulation, which will also feature talks on human encounters with black bears and cycles of moth pests in Northeastern fruit orchards. 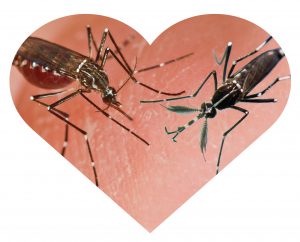 Battle at the bloodmeal lek

Invasive Aedes aegypti and Aedes albopictus are the principal vectors of dengue, chikungunya, and Zika viruses in the Americas. These species often find themselves in competition for mates and resources for their young. Cross-mating between the species creates infertile eggs and permanent sterilization of A. aegypti females. Lounibos and colleague Steven Juliano of Illinois State University described the causes and consequences of coexistence in south Florida. Lounibos will speak in a session on Invasion: Species Interactions.