New Brunswick family helps remove invasive snowshoe hares from a group of remote Bay of Fundy Islands, five decades after introducing them — and other highlights from the February issue of Frontiers in Ecology and the Environment. 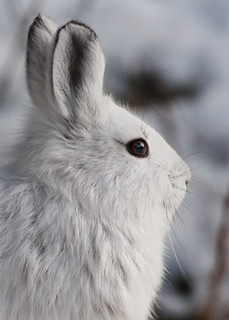 Too much of an adorable thing. Snowshoe hares like this one, photographed in its winter finery in Denali National Park, are native to North America and range across the north of the continent from Alaska to the coast of Maine, but had not colonized the remote islands of the Bay of Fundy, 15 miles off the coast of Maine, without human help. Credit, NPS Photo/ Tim Rains.

Snowshoe hares arrived on tiny Hay Island, at the mouth of the Bay of Fundy, in 1959, traveling by boat from Grand Manan Island, New Brunswick, Canada, with Wesley Ingalls and his nephew, Junior. The two fishermen had the idea that trapping hares would make an entertaining winter activity, when they were not fishing, and bring in a little extra money.

With no competitors and few predators, Ingalls’ original dozen hares quickly became several hundred. When low tide opened a causeway to neighboring Kent Island, they hopped across. Junior went out to Hay two years later to harvest young balsam firs for his herring weir, as was his custom. The forest stand never grew back. A bramble of wood fern and raspberry grew up in its place, crowding out other plants and providing excellent cover for bunnies hiding from bald eagles and wintering snowy owls.

Snowshoe hares are native to North America and range across the north of the continent from Alaska to the coast of Maine, but had not colonized the remote islands of the Bay of Fundy, 15 miles off the coast of Maine, without human help. On Hay and Kent their population reached 3-50 times the density of hare populations on the Maine mainland. They had an impact. Intrepid eaters, the hares mowed though young saplings as well as grass. In winter they even climbed the bases of trees to gnaw on twigs and bark. As mature trees aged and blew down in storms, no young trees grew to replace them. The hares bonsaied surviving young spruces into the shape of alpine cushion plants. For nearly five decades, the hares shaped the vegetation of Hay and Kent islands. Ingalls had unintentionally initiated and ecological experiment by introducing a keystone herbivore to the island.

Kent island also happens to house Bowdoin College’s biological field research station, originally established in 1930s as a preserve for the then near-extinct common eider (Somateria mollissima). In 1998 Nathaniel Wheelwright, a professor at Bowdoin and then the director of the Bowdoin Scientific Station, set out to eradicate the snowshoe hare with the help of Junior’s son and grandchildren. The hares came back. They tried again 2002, with additional recruits from Maine and New Brunswick, but failed again.

Wheelwright decided he needed help from the experts. He emailed the chief of New Zealand’s national pest control agencies, who replied, “Eradicating the hares using hunters and dogs from 70 ha ought to be trivial. You’re not trying very hard.” The team tried harder, and in 2007, succeeded in removing the last hare. Now, Bowdoin’s Scientific Station is observing the experiment in reverse. A think carpet of tree seedlings covers the forest floor. The trees are so successful in recolonizing open fields that they threaten the breeding habitat of the islands’ savanna sparrows, under observation by the station since the 1960s.. In an ironic twist, station biologists will have to mow fields to hold back the resurgent forest and preserve a long-running study from the era of the hare.

Large national parks that are home to gorillas, chimpanzees and other great apes are focal points for much of the field research on biodiversity conducted in tropical Africa and Asia, resulting in crucial knowledge gaps and a biased view of broader conservation needs in those regions say anthropologist Andrew Marshall colleagues. Scientists tend to place field studies in large protected areas that house our primate relatives, leaving a third of African protected areas with no research attention at all. Full press release from the University of Michigan.

The power of modern technology has made it possible to transport the benefits of ecosystems for human societies (ecosystem services) far from the source. Jianguo Liu and colleagues examine the consequences in a very dramatic example, China’s enormous South-North Water Transfer Project, designed conduct water from the Yangtze River basin hundreds of miles to three parched regions in the north. Construction began in 2002 and is expected to take 50 years. Though the water will flow with gravity on the Central route to Beijing, the Eastern route to the North China plain must flow uphill and tunnel under the Yellow River. The proposed Western route must pass the Bayankala Mountains. Liu and colleagues propose that natural cause-and-effect feedback from the environmental consequences of the water diversion, disconnected by distance, may be replaced by information flows between sending and receiving locations, in the form of news, science, and protest movements.

The Ecological Society of America (ESA), founded in 1915, is the world’s largest community of professional ecologists and a trusted source of ecological knowledge, committed to advancing the understanding of life on Earth. The 10,000 member Society publishes six journals and a membership bulletin and broadly shares ecological information through policy, media outreach, and education initiatives. The Society’s Annual Meeting attracts 4,000 attendees and features the most recent advances in ecological science. Visit the ESA website at http://www.esa.org.