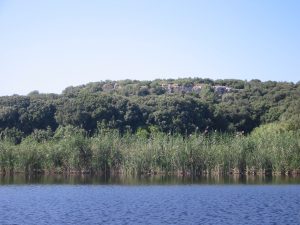 A grove of holm oak (Quercus ilex) on the south shore of Gorgo Basso, Sicily, stands relic to the forests of past millennia. Ancient pollen from the long-vanished forests, held in sediments collected from the lake bottom, testifies to the dense canopy of oak and olive trees that dominated the landscape more that 2,000 years ago. Scientists writing in the September issue of ESA Frontiers say that the diminution of the forest has been driven by the disturbances of human habitation and industry. With help, they say, the forests could again thrive under current and future climactic conditions. Credit, Willy Tinner, 2005.

The Mediterranean has cradled humanity and our cities, farms, domesticated animals, and logging habits for many thousands of years. During the last 5 to 8 millennia, as people developed farming and settled in cities, the landscape has gradually changed from a thick canopy of trees to open grass and shrubs. The ghosts of Sicily’s extinct evergreen forests of holm oak (Quercus ilex) and olive trees (Olea europaea) remain in the record of pollen left in the lakebed sediments. On the slightly cooler and wetter coast of Italy’s Tuscany region, European silver fir (Abies alba) once mixed with holm oak and deciduous oaks (Quercus cerris and Quercus pubescens).

Many researchers believe that progressively drier conditions in the Mediterranean brought about these changes in vegetation over the past 5–8,000 years. With the accelerating warming and drying brought to the region by anthropogenic climate change, the native trees might be expected to be pushed beyond the edge of their drought and heat tolerance, never to return. Some researchers have even suggested restoring forests with non-native Eucalyptus species from Australia or Douglas fir from North America.

In the September 2015 issue of ESA Frontiers, Paul Henne and colleagues dispute the idea that a drying climate was responsible for the disappearance of Mediterranean forests. They think that frequent wildfires, logging, agriculture, and the browsing of cattle, sheep, goats and unchecked deer over the long history of human occupation have wrought the changes to the landscape.

As a postdoc at the University of Bern, Switzerland, Henne, now research ecologist for the US Geological Survey’s Geosciences and Environmental Change Science Center in Denver, Colo., and his coauthors simulated current climate conditions in Sicily and coastal Tuscany, but with minimum human disturbance. Their models found that forests of oak and olive, much like the extinct, “pristine” forests that persisted until about 2,000 years ago, could prosper at present on the warm, dry coast of Sicily if fire is suppressed in the highly flammable shrublands until evergreen trees can mature. Silver fir (Abies alba) could be seen again at low elevation in Tuscany if protected from grazing animals and fire while the trees are young and vulnerable. Restoration of native vegetation, the authors argue, could slow erosion, improve water quality, sequester carbon, harbor wildlife, reduce fire risk, and build resilience for a hotter, drier future. 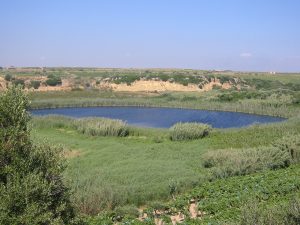 Getting a handle on ocean noise

Oceans are noisy in the modern era. Ships propellers generate a pervasive clamor, but the seismic airgun arrays used to map the seafloor have the largest acoustic footprint. The cumulative effect is confusing and stressful to undersea animals like whales, which use sound to communicate. But we lack the data to understand just how adverse are the effects and take steps to mitigate them, reports a group ecologists specializing in the role of sound in ecological processes in the September 2015 issue of ESA Frontiers . The group, drawn from the university, advocacy, and commercial realms, has reviewed the available data on ecological impacts of marine seismic surveys, concluding that existing environmental reviews are inadequate to meaningfully assess the impacts of noise on marine animals and the ecosystems they live in. They suggest the creation of legally binding international commitments to monitor and limit noise pollution in the sea.

More than half the world’s population now lives in cities. Previous research has demonstrated that urban green spaces and trees yield far-reaching benefits to people, from increased happiness and health to absorbing surface water run-off and storing carbon. Researchers have long debated whether it is better to build compact developments with large parks or nature reserves, as often found in Europe and Japan, or whether it is preferable to build sprawling suburbs with many small parks and gardens, as found in many North American and Australian cities. Iain Stott and colleagues at the University of Exeter, Penryn, UK and Hokkaido University, Sapporo, Japan analyzed nine case studies of cities worldwide, concluding that cities should feature compact development alongside large, contiguous green spaces to maximize benefits of urban ecosystems to humans. They report their results in the September 2015 issue of ESA Frontiers. Read the full press release from the University of Exeter.