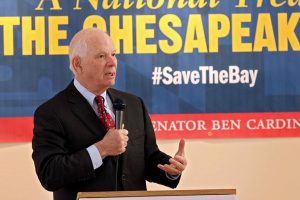 The Ecological Society of America (ESA) will present its eighth annual Regional Policy Award to U.S. Senator Ben Cardin (D-Md.) during the Society’s Centennial Meeting conference in Baltimore, Md. The ESA award recognizes an elected or appointed local policymaker with an outstanding record of informing policy decisions with ecological science.

“Through his decades of public service, Senator Ben Cardin has been a champion for environmental protection that benefits the people of the city of Baltimore, the state of Maryland and our nation,” said ESA President David Inouye. “Through his position on the Senate Environment and Public Works Committee, he is a leading voice in promoting ecosystem health and ensuring science has a place at the table in the federal policymaking process.”

Senator Cardin is a senior member of the Senate Environment and Public Works Committee and the former chairman of the Water and Wildlife Subcommittee. He is an advocate for Chesapeake Bay restoration, water infrastructure improvements and addressing the multifaceted impacts of climate change. A highlight of his efforts include sponsorship of the Chesapeake Clean Water and Ecosystem Restoration Act, which encourages national, state and local officials, businesses and other stakeholders to engage in collaborative efforts that accelerate restoration of the Chesapeake Bay. Additionally, he has authored legislation requiring the federal government to comply with local storm water fees that are used to treat and manage polluted storm water runoff that was signed into law by the president in early 2011 (Public Law 111-378).

First elected to the Senate in 2006 and reelected in 2012, Cardin also serves as Ranking Member of the Senate Foreign Relations Committee and is a member of the Senate Committees on Finance, and Small Business and Entrepreneurship. During each of these assignments, he furthered protections for the environment and public health. He began his congressional career in the U.S. House of Representatives in 1987, representing Maryland’s 3rd Congressional District, which composes portions of Baltimore, Howard and Anne Arundel counties. Previously, during 18 years in the Maryland House of Delegate, he served as speaker of the Maryland House of Delegates from 1979 to 1986.

“Good science and the rule of law should always be at the forefront of policy making. We have one world to protect, so we have to get this right,” said Senator Cardin. “The notions that we must choose between economic growth and environmental protection or public health are fallacies. I thank The Ecological Society of America for a century of keeping scientists and students engaged in this important effort.”

ESA President Inouye will present the 2015 ESA Regional Policy Award at the start of the Opening Plenary on Sunday, August 9 at 5 PM in the Key Ballroom of the Baltimore Hilton.  ESAs Centennial conference is expected to draw over 4,000 scientists, policymakers and others attending from around the world.