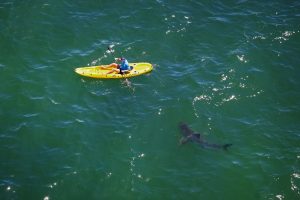 The great white shark (Carcharodon carcharias) has a terrifying reputation. Shark attacks, though very rare, loom large in our imaginations, drawing intense media attention when they occur. Recent injuries in North Carolina are putting sharks in the limelight again. But going after sharks à la Jaws is not the best way to protect people in the water, said shark researchers.

California scientists found that the risk of white shark attack for individual ocean users in California has fallen strikingly, by over 91 percent, since 1950, in a study to be published online ahead of print in the Ecological Society of America’s journal Frontiers in Ecology and the Environment later this month.

Information that empowers ocean users to avoid the large predators is far more effective for public safety than culling sharks, the authors said.

“Just like we check the weather before going boating or the surf forecast before surfing, information about the risk of encountering large predators can become a normal precaution we take before going into the ocean,” said first author Francesco Ferretti of Stanford University.

Ferretti and his colleagues at Stanford and the Monterey Bay Aquarium looked at the number of reported white shark attacks that caused injuries on the California coast from 1950 to 2013, as recorded by the Global Shark Attack File—86 injurious attacks, of which 13 were fatal. They weighted the numbers with information on coastal population growth and seasonal and weekly beach going, surfing, scuba diving, abalone diving, and swimming.

Many more people are enjoying the ocean, and so, although the number of shark bites per year has increased over the last six decades, these numbers actually hide a much reduced risk to individuals. Three times as many people live in coastal California now as did in 1950. But the popularity of ocean sports has expanded far more dramatically. The 7,000 surfers hitting the waves in 1950 became 872,000 by 2013. Certified scuba divers grew from about 2,000 at the beginning of the 1960s to about 408,000 in 2013.

“Doing this kind of analyses can inform us on hot spots and cold spots for shark activity in time and space that we can use to make informed decisions and give people a way to stay safe while they are enjoying the ocean,” said Ferretti. For example, in the fall there is a higher chance to find big white sharks on the California coast than in spring, when they migrate to Hawaii. The risk of encountering a shark is higher in the evening. The authors found that in Mendocino County, it is 24 times safer to surf in March than in October and November – and if surfers choose the coast between Los Angeles and San Diego in March, they can be 1,566 times safer than they would be during the fall months in Mendocino.

“We don’t necessarily have to see conservation and public safety as at odds with each other. This is also true of coastal economies. People can coexist with predators,” said Micheli.

There is no evidence that culling sharks improves the safety of ocean users, said the authors. Culling efforts often end up killing shark species that are not dangerous to people. Culling sharks is not under discussion in California, but has been a contentious issue elsewhere.

Culling is also expensive. Western Australia spent A$22 million on a 2014 cull and did not catch a single white shark. The authors argue that resources could be better spent getting good information to the public and collecting more data on the numbers, patterns, and behaviors of both sharks and people. Even in California, where monitoring is relatively good, estimates of the white shark population vary by an order of magnitude, from 500 to 5,000. Additional data on ocean users is needed.

“The more we know about the behavior of users and predator population, the more the analysis can be refined. There is a lot that can be done to really improve the information that we have for conservation and public safety,” said Ferretti.

Sharks species are among the most endangered animals worldwide, due to habitat degradation, declining prey, fishing bycatch, and growing consumer demand for shark fins. In recent years, fisheries management and international agreements have included more protections for sharks. But every year, 100 million sharks are killed. Slow growing, with late maturity and few progeny, sharks are sensitive animals that do not have the biological characteristics to sustain this level of exploitation.

Removing top predators like white sharks from ecosystems causes a cascade of bad consequences for the health of the ecosystems and local economies. Prey populations can suddenly boom, putting heavy demand on species further down the food chain. The collapse of the bay scallops (Argopecten irradians) fishery in North Carolina is linked to the rise in numbers of scallop eating cownose rays (Rhinoptera bonasus), due to overfishing of the predatory sharks which once kept ray numbers in check. Crowding resulting from a boom in prey numbers can also lead to disease outbreaks.

“Loss of predators can result in species that have negative impacts on economic activities becoming unchecked,” said Micheli. “You don’t know what you have until you lose it.”

The trend in increased number of shark attacks may indicate an increasing population of white sharks off California’s coast, but it is difficult to know without baseline historical data, the authors said. Conditions have improved for the sharks. Commercial and recreational fishing of white sharks is not permitted in California waters. Restrictions on use of drift gill nets, which have a high rate of bycatch, have improved the survival of juvenile sharks. But perhaps the best boost for the white shark population is the remarkable recovery of a favored prey species, the northern elephant seal (Mirounga angustirostris), from fewer than 100 at the end of the nineteenth century to over 100,000 today.

Ferretti and colleagues suspect that the return of the elephant seal may be the key to the greatly reduced risk of white sharks for humans, as sharks are drawn to seal rookeries and away from areas heavily used by people.

“Earlier, sharks were wandering around California waters, searching for food. Now they know where their preferred prey is,” said Ferretti. Knowing the sharks congregate near the seals is useful to ocean users who wish to avoid encountering the predators.

“This is an important result,” said Micheli. “In this case, the recovery of prey has not meant an increase in risk for people, as has been proposed for predators both on land an in the ocean.”

Shark encounters are extremely rare, on the order of 10 per year worldwide, Micheli stressed. Swimmers are 1,817 times more likely to die from unintentional drowning in California than shark attack, according to statistics available from the Centers for Disease Control and Prevention. California scuba divers are 6,897 times more likely to be hospitalized for decompression sickness.

“You have a higher chance to win the lottery, a much higher chance to drown in the ocean, than to be attacked by a shark. At the same time, people need to approach the ocean with precaution and respect. We are entering the realm of predators and they are fulfilling their ecological role,” said Ferretti

“Even a single attack is a tragedy,” said Micheli. “More information can help reduce the risk of tragedy.”

This research was funded by the Lenfest Ocean Program.

Now seeking proposals for symposia, Inspire sessions and organized oral sessions for the 2022 Annual Meeting in Montreal -- due Nov. 4th!