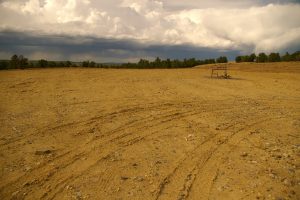 Homogenized bare soil surrounds a wellhead on a  typical natural gas well pad that has been prepared for interim reclamation. Credit, Tamera Minnick.

Big sagebrush is often conspicuously absent at restoration sites decades after disturbance. Historically, grasses have dominated the vegetation recovery following development, offering limited diversity and poor quality habitat for the 350 wildlife species harbored by what was once the most widespread ecosystem in the western United States.

“Successful restoration is more than establishing vegetation. To restore wildlife habitat so that it is self-renewing, it is critical that soils are returned to a healthy status as quickly as possible,” said the study’s lead scientist, Tamera Minnick, Professor of Environmental Science at Colorado Mesa University.

The authors sampled two undisturbed reference sites and eight reclaimed or abandoned natural gas well pads in Rio Blanco County, Colorado. They found that none of the oil and gas well pads included in the study had returned to a reference, or pre-drilling, condition, even those that had had 20 to 50 years to recover.

When a well pad is built, the topsoil and lower soil layers are removed and stored in piles in order to create a level work surface for drilling wells. Today’s well pads, often consisting of dozens of wells per pad, may require removing soil from an area of 3-10 acres. When drilling is completed, current reclamation standards require oil and gas companies to replace the soil and reestablish plants. However, the stored soils are now thoroughly mixed or homogenized and have lost the patchy pattern of soil nutrients that existed before the well pad was built.

“Sagebrush modifies its habitat to create patchy soils that make the habitat more resilient and even better for supporting sagebrush and all the other plants and animals that depend upon this important ecosystem,” said Richard Alward, Principal Ecologist with Aridlands Natural Resource Consulting, and the study’s coauthor. 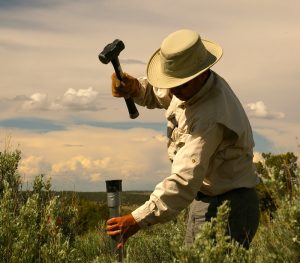 Other researchers have documented that sagebrush shrubs trap decaying organic matter, moisture, and nutrients in the soil beneath  their canopies, creating “islands of fertility” in sagebrush habitat, which Minnick and Alward confirmed. The patchy pattern of nutrients favors the recovery of sagebrush, creating a positive feedback that reinforces the persistence of the ecosystem.

The researchers found that some reclaimed well pads had total plant cover that was similar to the reference sites, a current requirement for reclamation, but those plants were primarily grasses or rabbitbrush. These species do not produce patches of high and low soil organic matter; instead the soils are much more uniform. This uniformity may ultimately make it more difficult to reestablish sagebrush – and to restore conditions favorable to diverse wildlife species.

“There can be a conflict between short- and long-term restoration goals, for example, between immediate erosion control versus restoring wildlife habitat,” said Minnick. “For the long-term stability of these ecosystems, it is critical to establish the natural feedbacks between plants and soil. And in this ecosystem, that means establishing big sagebrush. Wildlife habitat goals cannot be realized by merely establishing grasses.”

Semi-arid and arid ecosystems are notoriously difficult to restore after heavy disturbance. Researchers from Idaho to Nevada, from Australia to Israel, have been identifying techniques that improve the chances of restoration success in these dry areas. These techniques work to promote soil patchiness, and positive feedbacks between plants and soils, in a process termed “autogenic” restoration.

The region where this study was conducted is considered “semi-arid” since it typically records less than 11 inches of rain per year. The researchers studied 10 sites on public lands managed by the U.S. Bureau of Land Management in Rio Blanco County, western Colorado, approximately 55 miles north of Grand Junction.  This area has seen periodic, and sometimes very intense, oil and gas exploration over the last several decades. The soils of eight well pads that had been completed at various times since the 1960s were compared to soils at two nearby undisturbed sagebrush sites.

Successful restoration of oil and gas disturbances generates many benefits – to hunters and conservationists concerned with wildlife habitat, to oil and gas operators who desire continued access to these resources, to the public who reap benefits such as clean water and recreation opportunities, and to land managers who are responsible for  maintaining the land for multiple uses.

Sagebrush ecosystems provide important habitat for many wildlife species in the western United States, including mule deer, pronghorn, elk, pygmy rabbits, golden eagles, and greater sage-grouse (the latter is a species being considered by the U.S. Fish and Wildlife Service for protection under the Endangered Species Act). Improved habitat restoration may decrease pressure for federal intervention to protect this iconic bird. 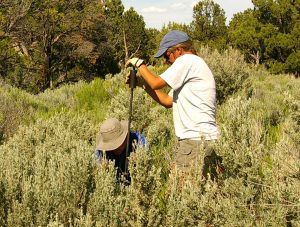 ecological knowledge, committed to advancing the understanding of life on Earth.  The 10,000 member Society publishes six journals and broadly shares ecological information through policy and media outreach and education initiatives. The Society’s Annual Meeting attracts over 3,000 attendees and features the most recent advances in ecological science. Visit the ESA website at https://www.esa.org.