In a rapidly changing north, new diseases travel on the wings of birds When polar bears (Ursus maritimus) meet glaucous gulls (Larus hyperboreaus) over the remains of a bowhead whale (Balaena mysticetus), they may be sharing more than a meal. As the warming climate brings animals into new proximity, parasites, viruses, and bacteria can find opportunities to spread to new and naïve hosts, sometimes jumping from birds to mammals, and from marine ecosystems to land ecosystems. Photo credit, USGS.

How does an elephant feel? What is the internal state of a cockroach? How does a raver’s past drug use linger in his hands? Accelerometers attached to animals can track not only location and motion but the animal’s internal state of health, hormones, and even emotions, moods, and motivations. The authors track specific components of internal state in three different animal models: chemical state in humans (Homo sapiens), affective state in African elephants (Loxodonta africana), and disease state in death’s head cockroaches (Blaberus craniifer).

From the warm coral reefs to the cold waters under polar ice, tens of thousands of tracking devices send information about the underwater world and the animals that carry them. The authors lay out complex questions that new technology may allow us to answer.

Slippery slopes and valuing all ecosystems, historical and new

All ecosystems are affected by human activity. Patches of historical “wild” ecosystems remain, embedded in a matrix of cities and suburbs, agricultural lands and parks, and every gradient in between. The authors discuss a management framework that classifies a patche of land by how much it has changed, how its changes influence neighboring landscapes, and how likely a reversion to the historical state is. New ecosystems that coalesce under the influence of climate change, species invasions, and human industry also have ecological and cultural value, they say, which needs to be considered in restoration efforts.

ESA is the world’s largest community of professional ecologists and a trusted source of ecological knowledge, committed to advancing the understanding of life on Earth.  The 10,000 member Society publishes six journals and broadly shares ecological information through policy and media outreach and education initiatives. The Society’s Annual Meeting attracts over 3,000 attendees and features the most recent advances in ecological science. Visit the ESA website at . 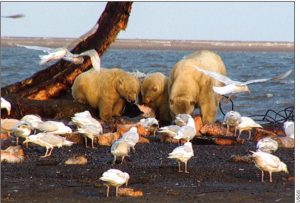