Highlights from the October 2014 issue of the Ecological Society of America’s journal Ecology, published online today. 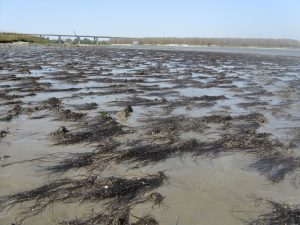 On the tidal mudflats of Georgia and South Carolina, the red Japanese seaweed Gracilaria vermiculophylla is gaining a foothold where no native seaweeds live. Only debris and straggles of dead marsh grass used to break the expanse of mud at low tide. Crabs, shrimp, and small crustaceans mob the seaweed in abundance. What makes it so popular? Not its food value. On mudflats near Savannah, Ga., Wright and colleagues found that the tiny native crustacean Gammarus mucronatus (one of the 9,500 species of amphipod, which includes sand fleas) does not eat much of the seaweed. Rather, its attraction is structural. The seaweed protects the small crustaceans from predators at high tide and from the dry heat of the flats at low tide. G. mucronatus was up to 100 times as abundant on seaweed invaded mudflats.

The arrival of an aggressive invader disrupts the food webs and physical and chemical characteristics of the environment it enters. Disruption is often bad for native species that get shaded, crowded, or eaten by the invader, and reports of the disastrous consequences of invasive species have grown familiar. But the story for individual species is more complicated, as the presence of the invader is sometimes a benefit, either as a new source of food or, as in this case, of shelter. 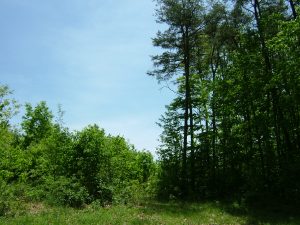 The tall, mature trees of a late-succession forest (right) stand next to the young regrowth of a clear-cut forest in central Pennsylvania. The deeper volume of organic matter on the floor of a mature forest can capture more of the nutrient nitrogen when it enters the forest than the clear-cut can. Credit, David Lewis.

Ecologists working in central Pennsylvania forests have found that forest top soils capture and stabilize the powerful fertilizer nitrogen quickly, within days, but release it slowly, over years to decades. The discrepancy in rates means that nitrogen can build up in soils. Forests may be providing an unappreciated service by storing excess nitrogen emitted by modern agriculture, industry, and transport before it can cause problems for our waterways.

Nitrogen is an essential nutrient, required for all living things to live and grow. Though a major component of the air, it is largely inaccessible, captured only through the metabolism of certain microbes or washed to earth in the form of ammonia, nitrogen oxides, or organic material by rain, snow, and fog. On land, microbes, fungi, and plants incorporate what doesn’t wash away into proteins, DNA, and other biological components. Organic matter in the soil – the remains of fallen leaves, animal droppings, and dead things in various states of decay – can also capture newly deposited nitrogen, holding it stable in the soil.

Mature forests store nitrogen more efficiently than young forests recovering from clear-cuts the authors found, because they have been accumulating organic matter on the forest floor for a century or more. When a forest is clear cut, erosion soon follows, washing away top soil. A young stand of trees a decade old is beginning to rebuild the organic layer, but it will take many autumns to accumulate.

The orderly succession of changes in resident species as a forest grows and ages is a classic preoccupation of ecological theory. The exchange of nutrients among the species and the non-living landscape also changes with succession, and the discovery that nitrogen accumulates in the organic soil indicates something important about how an ecosystem’s nutrient economy ages.  It was thought, up through the 1970s and early 80s, that an ecosystem grows like a person. At some point, forests, like people, stop getting bigger and adding new biomass. Ecologists argued that the ability to capture incoming nutrients stopped with the end of growth. But by the mid-80s, it was clear that mature ecosystems did continue to absorb nitrogen, mostly in soil. By showing that nitrogen capture is much faster than its release, Lewis and colleagues suggest a mechanism by which old ecosystems can accumulate new inputs of nutrients. 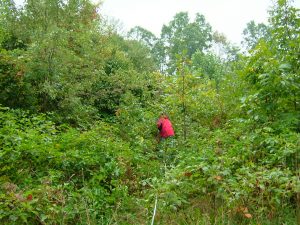 A member of the research team plunges into a stand of young trees, heading for a study plot in a central Pennsylvania forest recovering from recent clear-cutting.Credit, David Lewis.

Because soils rich in organics can quickly incorporate nitrogen, forest soils have the potential to absorb excess nitrogen that has been newly added to the biosphere through human activities. Application of synthetic nitrogen fertilizers and combustion of fossil fuels produce substantial amounts of ammonia and nitrogen oxides. Since industrialization, human activities have tripled the global rate of fixation of nitrogen from the air. The excess has perturbed the nutrient economies of many ecosystems, most visibly by feeding algal blooms and oxygen-deprived dead zones in lakes and estuaries. The study suggests that we may want to strategically conserve or restore forests, preserving organic-rich soils where they intercept the movement of ground water towards streams, lakes, or estuaries.

In streams around the world, small animals feeding at the bottom of the food chain are not eating the selection of decaying leaves, slimy film streambed films, and fine particulate detritus that ecologist have presumed they eat.

ESA is the world’s largest community of professional ecologists and a trusted source of ecological knowledge, committed to advancing the understanding of life on Earth.  The 10,000 member Society publishes six journals and broadly shares ecological information through policy and media outreach and education initiatives. The Society’s Annual Meeting attracts over 3,000 attendees and features the most recent advances in ecological science. Visit the ESA website at https://www.esa.org.