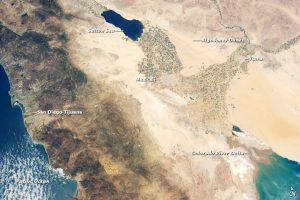 Tides flow backwards up the dry channels of the Colorado River delta, as seen in an astronaut photo taken June 21, 2013. Prior to the construction of the Hoover Dam and other large water projects on the Colorado, the delta estuary supported a great diversity of species in 3,000 square miles (7,700 square kilometers) of braided channels and lagoons. Now, the riverbed often dries not far from the Arizona-Mexico border. In the spring of 2014, an experimental “pulse” of 105,000 acre-feet (130 million cubic meters) of water were released from the lowest dam on the river in an effort to recover some the lost services provided by the lower Colorado ecosystems. Credit, NASA. (Click image to enlarge it).

Last spring, the Colorado River reached its delta for the first time in 16 years, flowing into Pacific Ocean at the Gulf of California after wetting 70 miles of long-dry channels through the Sonoran Desert. The planned 8-week burst of water from Mexico’s Morelos Dam on the Arizona-Mexico border was the culmination of years of diplomatic negotiations between the United States and Mexico and campaigning from scientists and conservation organizations. Now ecologists wait to see how the short drink of water will affect the parched landscape.

This year’s spring pulse held less than 1 percent of the volume of the Colorado’s annual spring floods before the construction of ten major dams and diversions to municipalities, industry, and agriculture. A return of the lush Colorado delta of the 1920s will not be possible. But there is hope that periodic flows will bring back willow, mesquite, and cottonwood trees, revive insects and dormant crustaceans, give respite to birds migrating on the Pacific Flyway, and ease strains on fisheries in the Sea of Cortez (Gulf of California).

Environmental flows for natural, hybrid, and novel riverine ecosystems in a changing world

There are two primary ways to achieve “environmental flows” of water necessary to sustain river ecosystems, write Mike Acreman, of the UK’s Centre for Ecology & Hydrology, and colleagues in a review published this month in Frontiers in Ecology and the Environment: controlled releases like the recent experiment on the Colorado that are designed with specific objectives for ecology and ecosystem services in mind and hands-off policies that minimize or reverse alterations to the natural flow of the river.

For rivers like the Colorado, already much altered and bearing heavy demands from many different user groups, a “designer” approach is more practical than attempting to return the river closer to its natural, pre-development state, say the authors. Designers work to create a functional ecosystem or support ecosystem services under current conditions, rather than recreate a historical ecosystem.

Achieving ecological objectives requires planning beyond minimum flows and indicator species to encompass seasonal floods and slack flows and a holistic look at the plants, fish, fungi, birds and other life inhabiting the river, its banks and its marshes. Managers must plan to turn on the taps when ecosystems can capitalize on the flow, lest water releases do more harm than good. Several decades of applied research guided the planning for the engineered “spring flood” on the lower Colorado this year, which was timed for the germination of native trees.

Rebirth of the Elwha River 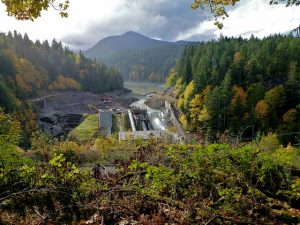 The Elwha River pours through the remains of the Elwha Dam in Washington State’s Olympic National Park on October 23, 2011. The former reservoir beds have recovered quickly and salmon and steelhead have returned after demolition of the two dams on the river. Credit Kate Benkert, USFWS.

For rivers with fewer economic and social demands, restoration guided by historical records of the natural dynamics of the river can be an effective restoration strategy, say Acreman and colleagues. To preserve species and get the maximum value from ecosystem services, river systems need to fluctuate in natural rhythms of volume, velocity, and timing ( to put it very simplistically).

At the end of the twentieth century, Washington State decided that the water of the Elwha River would be most valuable flowing freely through Olympic National Park to the Pacific at the Strait of Juan de Fuca, supporting salmon, trout, clams, and tourism. Habitat and eroded coastline are recovering at an astonishing pace only one year after the demolition of two dams freed the river, as Noreen Parks reports for her news story “Rebirth of the Elwha River” in ESA Frontier’s October Dispatches.

Rivers of the Anthropocene?

Outside protected wilderness, the Elwha’s story may be more of an anomaly than a blueprint for future river restoration projects. As non-native species, land development, and climate change remodel river ecosystems, it is no longer easy to define what is “natural” for river systems. But heavily used, regulated, and altered rivers have ecological value.

“The future of freshwater biodiversity is inextricably linked to land and water infrastructure management,” writes N LeRoy Poff of Colorado State University in his guest editorial for ESA Frontiers, in which he contemplates whether rivers have changed so much that we need to rethink some of our conceptions about restoration.

“We are rapidly entering an era where restoration interventions will be guided less by statistical deviations from historical reference conditions and more by “process-based” understanding of organism–environment relationships,” he writes.

ESA is the world’s largest community of professional ecologists and a trusted source of ecological knowledge, committed to advancing the understanding of life on Earth.  The 10,000 member Society publishes six journals and broadly shares ecological information through policy and media outreach and education initiatives. The Society’s Annual Meeting attracts over 3,000 attendees and features the most recent advances in ecological science. Visit the ESA website at https://www.esa.org.