Climate change, predators, and the trickle down effects on ecosystems

Ecologists are just beginning to understand how the impacts of climate change are affecting predatory keystone species and their ecosystems. Ecologists will report on this and other climate-ecosystem research news at the Ecological Society of America’s 2014 Annual Meeting in Sacramento, Cal., August 10–15.

Predators play important roles in maintaining diverse and stable ecosystems. Climate change can push species to move in order to stay in their climatic comfort zones, potentially altering where species live and how they interact, which could fundamentally transform current ecosystems.

A symposium focusing on climate’s effects on predators—causing cascading effects on whole ecosystems — will take place on Tuesday, August 12th during the Ecological Society of America’s 99th Annual Meeting, held this year in Sacramento, California.

There will be “winners” and “losers” as species adapt to a changing climate. Ecologists are just beginning to understand why different competitors may be favored by climate change and how consumer-resource interactions are modified. Impacts on one species can affect many organisms in an ecosystem. Because predator species are animals that survive by preying on other organisms, they send ripples throughout the food web, regulating the effects other animals have on that ecosystem. This cause and effect process is called a “trophic cascade,” or the progression of direct and indirect effects predators have across lower levels in a food chain.

Sea otter populations provide a historical example of this phenomenon. The fur trade spanning the late 1700s to early 1900s decimated their numbers across their range, from Alaska to Baja California, Mexico. Populations went from an estimated several hundred-thousand to more than a million down to 1,000–2,000. Today, there are estimated to be just over 106,000 worldwide, with just under 3,000 in California. Now sea otters and other important predator species face the challenges of a changing climate.

“The near extinction of sea otters is one of the most dramatic examples of human-induced impacts to the structure and functioning of temperate nearshore marine ecosystems,” said Rebecca G. Martone, of the Center for Ocean Solutions at Stanford University.

Sea otters must eat about 25% of their body weight daily to maintain their body temperature since unlike other marine mammals they rely solely on their fur rather than an extra layer of blubber to stay warm—it’s like a 120-pound human eating 30 pounds of food per day. Some of otters’ favorites are abalone, clams, crabs, mussels, shrimp, and sea urchins. Few predators can crack the globe-shaped spiny urchins, which in unchecked hordes will chew through the holdfasts of the kelp, leaving vast barrens in place of the vibrant forests. The otter is a “keystone predator” whose presence has an outsized effect on its kelp forest habitat.

Without sea otters, the undersea sea urchins they prey on would devour the kelp forests, resulting in dense areas called sea urchin barrens that have lower biodiversity due to the loss of kelp that provide 3-dimensional habitat and a food source for many species. Researchers found that when sea otters arrive in an area from which they have been absent, they begin feasting on urchins. As a result, the kelp forest begins to grow back, changing the structure of kelp forest communities.

Dr. Martone’s analyses of the effects of sea otters on kelp forest ecosystems can help shape predictions of how climate change and trophic cascades, in concert with other drivers, affect coastal ecosystems. The ecological impacts of a changing climate are evident, from terrestrial polar regions to tropical marine environments. Ecologists’ research into the tropic cascading effects of predators will assist decision makers by providing important scientific findings to prepare for the impacts of climate change occurring now and into the future. Speakers for the symposia include marine, freshwater and terrestrial experimental ecologists who will present their research and offer insights from different approaches used to studying consumer-resource interactions. 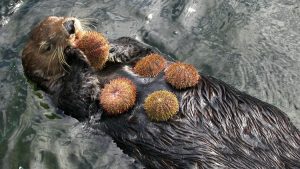