The butterfly (Dryas iulia) and the bee (Centris sp.) were most likely seeking scarce minerals and an extra boost of protein. On a beautiful December day in 2013, they found the precious nutrients in the tears of a spectacled caiman (Caiman crocodilus), relaxing on the banks of the Río Puerto Viejo in northeastern Costa Rica.

A boat carrying students, photographers, and aquatic ecologist Carlos de la Rosa was passing slowly and quietly by, and caught the moment on film. They watched and photographed in barely suppressed excitement for a quarter of an hour while the caiman basked placidly and the insects fluttered about the corners of its eyes.

De la Rosa reported the encounter in a peer-reviewed letter in the May 2014 issue of the Ecological Society of America’s journal Frontiers in Ecology and the Environment.

“It was one of those natural history moments that you long to see up close,” said de la Rosa, the director of the La Selva Biological Station for the Organization for Tropical Field Studies in San Pedro, Costa Rica. “But then the question becomes, what’s going on in here? Why are these insects tapping into this resource?”

Though bountiful in the ocean, salt is often a rare and valuable resource on land, especially for vegetarians. It is not uncommon to see butterflies sipping mineral-laden water from mud puddles. When minerals are rare in the soil, animals sometimes gather salt and other rare minerals and proteins from sweat, tears, urine, and even blood.

A solitary bee (Centris sp) drinking the tears of a yellow-spotted river turtle (Podocnemis unifilis). Olivier Dangles and Jérôme Casas (2012). The bee and the turtle: a fable from Yasuní National Park. Frontiers in Ecology and the Environment 10: 446–447. [Download PDF]

De la Rosa had seen butterflies and moths in the Amazon feeding on the tears of turtles and a few caimans. Tear-drinking “lachryphagous” behavior in bees had only recently been observed by biologists. He remembered a 2012 report of a solitary bee sipping the tears of a yellow-spotted river turtle in Ecuador’s Yasuní National Park. But how common is this behavior?

Back at the field station, he did a little research. He was surprised to find more evidence of tear-drinking than he expected in the collective online record of wilderness enthusiasts, casual tourists, professional photographers, and scientists. He now thinks the phenomenon may not be as rare as biologists had assumed—just hard to witness.

“I did a Google search for images and I found out that it is quite common! A lot of people have recorded butterflies, and some bees, doing this,” said de la Rosa.

A search of the scientific literature produced a detailed study of bees drinking human tears in Thailand, as well as the remembered October 2012 “Trails and Tribulations” story about the Ecuadorian bee and the river turtle by Olivier Dangles and Jérôme Casas in ESA’s Frontiers (pdf).

This experience reminds us that the world still has many surprises for ecologists, de la Rosa said. There so much still to be studied. De la Rosa is a specialist in the biology of non-biting midges, and a natural historian, with his eyes always open to new discoveries. Scientists at La Selva have discovered hundreds of species of aquatic insects that are still unnamed and undescribed.

A new species of dragonfly emerges. A species of Erythrodiplax, it is only the second dragonfly found that lives in bromeliad plants. Credit, Carlos de la Rosa.

“I have over 450 undescribed species from Costa Rica in my laboratory. If I did nothing for the rest of my life but collaborate with taxonomists and try to describe those, I would never get done,” he said.

De la Rosa’s job as director of La Selva Biological Station brings him an unusual number of serendipitous encounters with wildlife. He lives on site in the lowland rainforest, and he never needs an alarm clock. Howler monkeys wake him every morning.

“I learned I have to carry a camera with me 24/7, because you never know what you’re going to find when you’re walking to the office or the dining hall,” he said. One day, he spied a new species of dragonfly on his way to breakfast. It had emerged from its larval form in the small pool of water caught in the cupped leaves of a bromeliad plant. He did a double-take. Dragonflies don’t live on bromeliads. Or do they?

“Those are the kinds of things that, you know, you don’t plan for them, you can’t plan for them,” de la Rosa said. There was only one known species of dragonfly in the world that lives in bromeliads. Now there will be two. “You just keep your eyes open and have curiosity, and when you see something that doesn’t seem to fit, dig.” 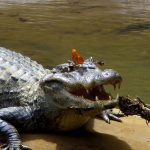 La Selva Biological Station and its parent institution, the Organization for Tropical Studies, manage a 1,600-hecter lowland rainforest preserve connected to large conservation areas in northeastern Costa Rica. The station is nearly 60 years old, and maintains some of the longest running tropical ecology datasets. Each year, it hosts 250 to 340 researchers from over 100 institutions, and many specialized courses in biology.