Cape Cod, Massachusetts has a problem. The iconic salt marshes of the famous summer retreat are melting away at the edges, dying back from the most popular recreational areas. The erosion is a consequence of an unexpected synergy between recreational over-fishing and Great Depression-era ditches constructed by Works Progress Administration (WPA) in an effort to control mosquitoes. The cascade of ecological cause and effect is described by Tyler Coverdale and colleagues at Brown University in a paper published online this month in ESA’s journal Frontiers in Ecology and the Environment. 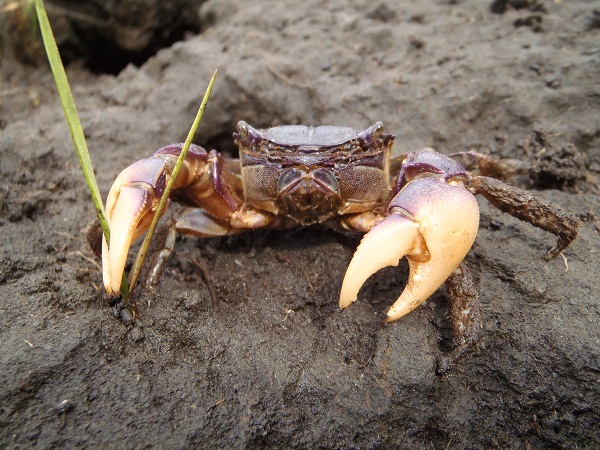 A large male purple marsh crab (Sesarma reticulatu) clipping cordgrass with its claws. The burrow opening in the photograph leads to a large, communal burrow inhabited by 10-15 crabs. These crabs are nocturnal and typically reside in burrows during the day to stay moist and avoid predators. Credit, Tyler Coverdale

“People who live near the marshes complain about the die-off because it’s not nice to look at,” said Coverdale. “Without cordgrass protection you also get really significant erosion, retreating at sometimes over a meter a year.” The die-back is ugly, but it is also a substantial loss of a valuable ecological resource.

When fishermen hook too many predatory fishes out of the marsh’s ecosystem, the fishes’ prey go on fruitfully multiplying, unchecked. The reverberations down the food chain can result in uncomfortable environmental changes for human residents. The problem for Cape Cod is the native purple marsh crab (Sesarma reticulatum), which burrows in the mud along the inner shorelines of the marshes, and dines almost exclusively on the tall and fast-growing low marsh cordgrass (Spartina alterniflora) that lines the marsh edges.

The tall and sturdy cordgrass is an essential buffer against the friction of tides and storms. Without it, soft banks erode out from under the other plants and the water line retreats farther and farther back into the marsh. The unchecked multitudes of purple marsh crabs have taken a visible toll on the developed areas of the Cape. By 2008, 50 percent of the creek banks in the marsh had worn back. Old drainage ditches have expanded from nearly invisible threads to open channels – some nearly 30-40 meters wide – with muddy, exposed edges.

The purple marsh crabs need tidal creek edge habitat to thrive, and do not venture into the inner heart of the marsh, where a shorter cordgrass species (the closely related, but squattier Spartina patens) and other high marsh plants dominate. The old WPA mosquito ditches also fulfill the crabs’ habitat requirements. Once benign, the ditches nucleated dramatic reconstruction of the landscape with the loss of blue crab, striped bass, and smooth dogfish, and the subsequent boom of purple marsh crabs.

One of the remarkable features of the cordgrass die-off is its tight locality. Some areas of undeveloped marsh as close as a kilometer to the denuded banks around private residences and public docks appear healthy and unaffected. Mosquito ditches that can only be reached by a hard slog through undeveloped marshland do not display the striking die-off and bank erosion. The pattern cued the researchers to the possibility that recreational fishing was the trigger, Coverdale says. Few people wade into the swamp to fish.

Marshes are excellent model systems for observing the intersection of human impacts that can trigger environmental degradation, the authors say, because they have been exploited by humans for centuries, if not thousands of years, and are easily studied from aerial and satellite images.

“Marshes are one of the most heavily utilized resources worldwide,” said Coverdale. “They are easily accessible, and provide shellfish, fuel, baitfish and opportunities for recreational anglers. A lot of those harvests are probably sustainable.”But he is interested in the tipping points at which use of the marsh becomes unsustainable. The revelation of the slumbering menace of the mosquito ditches raises the prospect of other submerged impacts that may surface under the influence of new, contemporary pressures.

In the early twentieth century, Cape Cod was a very different place from the summer vacation destination it is today. As land use shifted from agriculture toward tourism, the local chamber of commerce funded an effort to draw off standing water through drainage ditches to suppress the mosquito population. The program was probably not very effective at controlling mosquito-borne disease, Coverdale says, but it did put a lot of people to work, and they were industrious. Over 2400 kilometers of old ditches stripe the marshes of the long, low-lying peninsula. The Cape Cod Mosquito Control Project continues ditch-dredging under the Barnstable County Department of Health and the Environment.

The ditching program had a relatively minor impact on the marshes compared to other forms of development, however. Following the Second World War, Cape Cod developed rapidly, nearly tripling in permanent human population between 1940 and 1976, when a new awareness of the ecological and economic benefits of the marsh brought strict limitations on further development. Ditches claimed only 2 percent of the marsh, compared with the 70 percent affected by roads, houses, restaurants, marinas, and other hallmarks of a modern coastal community. Alone, the ditches did not fundamentally alter the marsh ecosystem. The species that colonized the ditches were already present in the marsh; the WPA’s remodeling project just moved them around. The additional pressure of recreational fishing changed that equilibrium.

How do Cape Cod residents and local fishing enthusiasts feel about this news? Coverdale says the area has a strong conservation ethic. People remember what the Cape looked like when their parents lived there, and are unhappy with the changes. As a fishing enthusiast himself, Coverdale does not see ecologists and fishermen as opposing forces.

“People enjoy catching fish today, but they come back year after year. They want to see the fish there tomorrow,” Coverdale said. He has faith that the tendency of residents and long-time visitors to take the long view will make a solution possible. A system of catch and release could make fishing the Cape sustainable and allow the local community to retain its fishing heritage.

Photo:
A large male purple marsh crab (Sesarma reticulatu) clipping cordgrass with its claws. The burrow opening in the photograph leads to a large, communal burrow inhabited by 10-15 crabs. These crabs are nocturnal and typically reside in burrows during the day to stay moist and avoid predators. Credit, Tyler Coverdale.