Future of Alaskan forests, proliferation of plastic greenhouses, and the intersection of watershed protection and urban renewal

Weighing the costs and benefits of plastic vegetable greenhouses 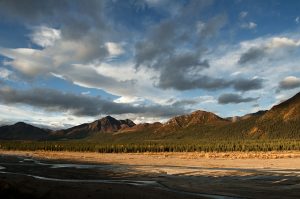 The economic benefits of intensive vegetable cultivation inside plastic greenhouses, particularly for small-holders, have driven a rapid mushrooming of long plastic tents in farmlands worldwide – but particularly in China, where they cover 3.3 million hectares and produce approximately US $60 million in produce (2008 figures). The method conserves water, binds up carbon, shrinks land use, protects against soil erosion and exhaustion, and mitigates problematic dust storms. But this change from conventional vegetable farming has harmful environmental effects as well. Chang et al review the current research and identify gaps in our knowledge in the February issue of ESA’s journal Frontiers in Ecology and the Environment. Learn more on ESA’s blog, EcoTone.

Alaska is already feeling the consequences of a changing climate in melting permafrost, coastal erosion, and retreating sea ice. Recent studies have predicted major landscape-scale change for the future of the Alaskan interior, with a potential shift from spruce-dominated boreal forest to broadleaf forest or grasslands, through a combination of heat, drought, insect outbreaks, and more frequent wildfires. This month in ESA’s journal Ecological Monographs, the National Park Service’s Inventory and Monitoring program reports on the first decade of ongoing ecosystem monitoring in Denali National Park. Carl Roland and colleagues visited 1100 study plots yearly, distributed over 4.5 million-acres of the park, often hiking into remote locations, scrambling rocky slopes and wading mountain ponds to reach randomized plots and acquire data on patterns of tree species distribution across the rather large terrain variation in Denali. They predict that the iconic white spruce may expand higher up mountain slopes and into thawing tundra.

This paper will be featured in an interview with Carl Roland on ESA’s podcast Field Talk, coming in early March. Read more about the science of Denali’s changing landscape on the NPS Alaska Regional Office website.

When you bring neighbors outdoors to work on a shared community problem, the project brings people together. It creates, as sociologists like to say, “social cohesion.” People see that they have power over their environment – that, as a group, they can influence access to city services. Like many older cities, Baltimore is coping with an aging sanitary sewer system. Ecologists, city planners, and social organizers saw an opportunity to simultaneously revitalize urban neighborhoods and urban watersheds by expanding green spaces. Investments in private yards and public parks and school yards could, they thought, diminish nitrogen and phosphorous runoff to Chesapeake Bay, improve storm-water management, and bolster quality of life in underserved, and economically disadvantaged city neighborhoods.

Other titles of interest: