Congressmen lauded for their commitment to biological research 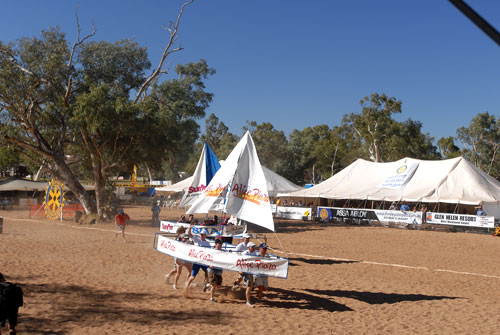 WASHINGTON-‘When the River Runs Dry’ is a familiar song in Australia. Some rivers in the arid center of the continent flow only after a stiff monsoon season, and smaller tributaries all over the country commonly shrink to puddled potholes and dry river beds during the dry season. But rivers also run dry in more temperate climes. Much of the upper reaches and feeder streams of the great rivers of North America, and even the mighty Amazon, dry out seasonally.

Dry rivers are more than mere desiccated shells of their robustly flowing incarnations, says Australian ecologist Alisha Steward and colleagues. In the May issue of ESA’s journalFrontiers in Ecology and the Environment, they contend that dry river ecology is under-researched and under-appreciated.

“I was drawn to dry stream ecology from working on river health monitoring and assessment programs,” said Steward, a PhD student at Griffith University in Brisbane, Queensland. “Many potential river monitoring sites turned out to be dry and couldn’t be sampled. It was very annoying! It started to get me thinking that ‘dry’ wasn’t necessarily bad or unnatural – some rivers were naturally dry at particular times of the year.”

Dry river beds have qualities and inhabitants distinct from their adjacent riversides, as well as from their wet-phase communities, says Steward. They are places of isolation and re-connection: when rivers flow, aquatic animals, plants and microorganisms, organic material, and nutrients flow as well.

Temporary rivers are conduits for biota even when dry, sometimes guiding animals through human-dominated landscapes that lack other continuous habitat. They demand great resilience of their permanent inhabitants, which must be able to survive the swings from immersion to dry land to wet again. Plants, algae, insects, fungi, and even fish have adapted to ride out the dry spells, sometimes seeming to resurrect themselves miraculously from the dust. In the more ephemeral rivers of arid regions, the demands are extreme, the flows erratic, and often separated by years.

But in arid country, dry river beds are oases for animals and people alike. They are sources of water and greenery. Worldwide, human societies use the rich and episodically dry land for vegetable patches, orchards, and pastureland, walking and vehicle paths, hunting and hiking, and herding animals to market. We mine the beds for sand and gravel to build homes and businesses. We park our cars in the beds, and hold races and festivals on the flat river bottoms.

Land use changes, climate changes, and diversions to water projects are transforming historically perennial rivers into capricious or seasonal flows. Impoundment behind weirs and dams can completely dry a river course, or, conversely, turn an erratic flow continuous or cyclical through controlled releases. Steward thinks these are good reasons to learn more about the ecology of intermittent river systems.

Journalists and public information officers can obtain this article and related images, and gain access to all ESA publications, by contacting the public affairs office. Email Liza Lester, gro.asenull@retsell.

Racers at the annual Henley-on-Todd Regatta in Alice Springs, Australia, run their “boats” along the dry river bottom. Only once in the regatta’s fifty year history have the races been cancelled due to water. The ephemeral Todd River (Lhere Mparntwe) flowed this March for the first time since 2010.

Turtles are in decline worldwide, but few long‐term studies have sought to systematically explore trends and characteristics in numerous populations of a species over broad geographic areas. Eastern box turtles (Terrapene carolina), such as the one pictured here in a forested wetland in North Carolina, USA, are a species of conservation concern throughout much of their range, but natural resource professionals often lack sufficient information on population dynamics and responses to disturbances to guide management. In the March issue of Ecosphere, Roe et al. found that T. carolina populations remained temporally stable over a 10‐year period in North Carolina's protected areas, but population density decreased with more urban development and increased with more wetlands in the surrounding landscape. Population trends, demographic structure, and critical vital rates were consistent across ecoregions throughout the state, suggesting no need for region‐specific conservation and management. Rather, managers would benefit from targeting local threats such as urban land development and wetland destruction to ensure local population viability.