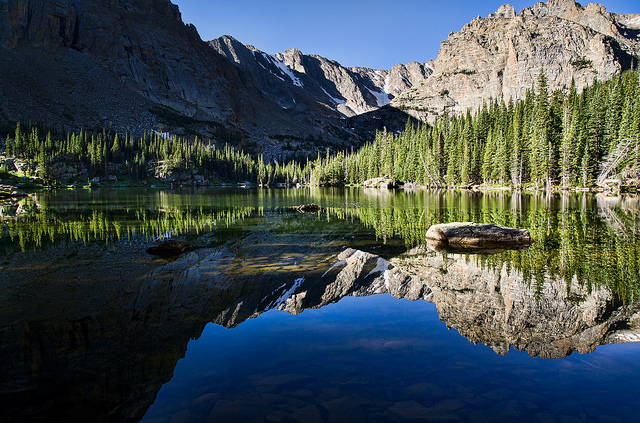 Air pollution is changing our environment and undermining many benefits we rely on from wild lands, threatening water purity, food production, and climate stability, according to a team of scientists writing in the 14th edition of the Ecological Society of America’s Issues in Ecology. In “Setting Limits: Using Air Pollution Thresholds to Protect and Restore U.S. Ecosystems,” lead author Mark Fenn (USDA Forest Service) and nine colleagues review current pollution evaluation criteria. The authors propose science-based strategies to set new limits and put the brakes on acid rain, algal blooms, and accumulation of toxic mercury in plants and animals.

Power plants, industrial processes, vehicles, farms and stockyards release mercury, sulfur dioxide, and nitrogen compounds into the air. Though several decades of emissions limits and improving technology have resulted in a downward trend in acid rain and mercury contamination in the U.S., up to 65 percent of lakes in sensitive areas exceed critical acid levels, and mercury advisories against fish consumption exist in all fifty states. The authors discuss standard measurements that can be used to monitor ecosystem effects across the country. They review the use of defined “critical loads”of pollutants to design policy and manage ecosystems in the U.S. and Canada.

Organisms and ecosystems tend to tolerate pollutants up to a critical amount of pollutant accumulation, responding slowly up to the critical threshold. Beyond the threshold, scientists observe undesirable, and sometimes rapid, changes. The best limits are set at these thresholds, the authors say. Scientists use standard indicators, such as the calcium to aluminum ratio as a measure of acidity of soil, to identify “critical loads” at which ecosystems start to tip into cascades of bad consequences.

“Not all landscapes and watersheds have the same sensitivity to pollutants,” said author Charles Driscoll, professor of civil and environmental engineering at Syracuse University, speaking at an ESA-co-organized Congressional briefing on October 25th. “The most pristine and remote are sometimes, counter-intuitively, the ones that have the highest levels of mercury in fish, for example, because of their characteristics.”

Forests soak up mercury more readily than do open lands. Nutrient-poor waters typically convert mercury more quickly to the toxic methyl-mercury form. Many lakes in the sparsely populated Canadian boreal forest are acidic enough to limit the growth of water fleas, crayfish and other crustaceans low on the food chain that are essential foods for many types of fish.

“In recent years, we’ve come to appreciate that pollution from mercury and acid rain affects not only the health of fish-eating birds and mammals, but also wildlife feeding on insects and other invertebrates,” said author David Evers, executive director and chief scientist of the Biodiversity Research Institute, also speaking at the briefing. Methylmercury, for example, which damages developing nervous systems and impairs adult cognition, also affects birds. Changes in adult nesting behavior, presumably due to the neurological effects of mercury poisoning, can cause young birds to die from parental neglect as well as developmental defects. The Environmental Protection Agency advises against consuming fish and shellfish contaminated with mercury above 0.3 parts per million (ppm), particularly for children and women of child-bearing age. Scientists see reproductive effects in fish-eating birds when mercury reaches 0.16 ppm in their prey.

Excessive nutrients can also alter the balance of ecosystems. In addition to contributing to air pollution and acid rain in the form of nitrogen oxides and ammonia, nitrogen compounds fertilize soils and waterways.

“Fertility sounds like a good thing,” Driscoll said, “But over-fertilization can cause the sudden overgrowth of some plants, algae or bacteria at the expense of other species.” The characteristic algal blooms that follow sewage releases or agricultural runoff are caused by the influx of nutrients. Overgrowth of plant life in estuaries can push oxygen levels so low that fish die.

Tree-inhabiting lichens and tiny, distinctive, single-celled algae species called diatoms are very sensitive to nitrogen compounds, and so changes in their relative abundance make good early warning signs for larger ecosystem changes, say the authors. Atmospheric ammonia is a particular problem because it is not regulated.

The U.S. needs to enact policy thresholds based on scientific thresholds, the authors say, to define critical loads of sulfur, mercury and nitrogen pollutants at levels at which humans and ecosystems can thrive.