Evolutionary traps, invasive yellow starthistle’s favorable response to carbon dioxide and plant breeding for harmony between agriculture and the environment 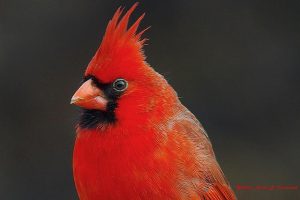 This month in ecological science, researchers report on evolutionary traps, the strong response of an undesirable non-native plant to elevated CO2 and the potential of new crop cultivars to meet human needs and ease environmental costs of agriculture. These articles are published in the September issues of the Ecological Society of America’s (ESA) journals.

A study published in the September issue of Ecology looks at how human activities can diminish the usefulness of an ornamental trait, such as colorful feathers, as a signal of fitness. Cardinals, for example, need carotenoids in their diet to produce their red plumage; brilliant red plumage can signal an individual’s health and fitness. Researcher Amanda Rodewald (Ohio State University) and colleagues looked at the socially monogamous Northern Cardinal (Cardinalis cardinalis) in 14 forests in Ohio between 2006-2008, measuring plumage color, reproduction, and quantifying habitat. They found that the non-native Amur honeysuckle (Lonicera maackii) altered the selective environments for coloration by creating an evolutionary trap for the cardinals in rural landscapes and possibly relaxing selection in cities. Evolutionary traps occur when behavior that was once beneficial is a drawback in an altered environment.

The non-native honeysuckle is appealing to cardinals because it provides dense vegetation for nesting. Honeysuckle fruits are also a source of carotenoid pigments the birds need for their red plumage. Previous studies suggest that plumage brightness or hue signal a bird that is in good condition, has a good territory, and will put energy into raising its offspring. But the non-native honeysuckle’s appeal to cardinals comes with a price: a nest in this shrub is more vulnerable to predators. Rodewald and colleagues found that in rural areas the mostly brightly colored male cardinals were in best condition, bred earliest in the season, and secured the more preferred territories that included the non-native shrub. But their annual reproductive success was lower than that of duller males. The authors did not see these results in urban forests, where color was not related to any reproductive indicators, likely because the abundant honeysuckle and birdseed reduce the usefulness of color as a signal of quality. This scenario might lead to relaxed selection for bright color in urban forests and selection against bright color in rural forests.

Yellow starthistle (Centaurea solstitaialis) is a highly invasive plant species in the grasslands of western North America. Native to the lands northeast of the Mediterranean Sea and highly poisonous to horses, yellow starthistle is considered one of California’s most problematic non-native plants. Jeffrey Dukes (Purdue University) and colleagues conducted field experiments in California and found that Centaurea grew more than six times larger in response to increases in atmospheric carbon dioxide (CO2) concentration and also responded favorably to nitrogen (N) deposition. In contrast, the surrounding grasses and wildflowers responded less strongly or not at all to increased CO2 and nitrogen levels. The researchers report their findings in the September issue of Ecological Applications.

“Given these results, we add Centaurea to a short but growing list of noxious and invasive plants demonstrated to dramatically benefit from CO2 in community settings, and to the longer list of invasives that benefit from increased N availability,” write the authors. “Atmospheric CO2 concentrations are increasing by 2 ppm/yr around the globe. Nitrogen deposition rates vary spatially, but are already higher than our treatment levels at one sampling station in California, and are expected to increase globally. Unless biocontrol agents become more effective at controlling Centaurea, the weed’s response to environmental changes is likely to heighten the challenge facing many North American land managers over the course of this century.” Read more…

Plant breeding for harmony between agriculture and the environment

Meeting basic human needs while also preserving the natural resources to do so is a major challenge of the coming century. Earth’s human inhabitants need more food, animal feed, fiber, fuel and forest products, all while facing shrinking vital resources such as land, water and nutrients. A new eView review paper in Frontiers in Ecology and the Environment asserts that plant breeding is a critical tool to bring about a more positive relationship between agriculture and the environment on which it depends.

In their review, E. Charles Brummer (Samuel Roberts Noble Foundation) and colleagues note that plant breeders are working to improve crop hardiness to withstand various environmental conditions, such as those associated with climate change. Many breeders are also interested in reducing agriculture’s negative impacts on the environment, such as contributing to oxygen-deprived dead zones in water bodies or soil erosion. Since the 1950s, crop improvements – together with inputs including fertilizers, pesticides and water – have enabled agricultural production to keep up with human demands. Now, say the authors, “partnerships between ecologists, urban planners, and policy makers with public and private plant breeders will be essential for addressing future challenges.” Co-author Seth Murray (Texas A&M University) adds that: “We tend to think that solutions are technological and can be put in place quickly. But new crop cultivars and species take decades or more to develop and there is no shortcut so we really need to start thinking now about what we will need in 10-20 years.” Read more…